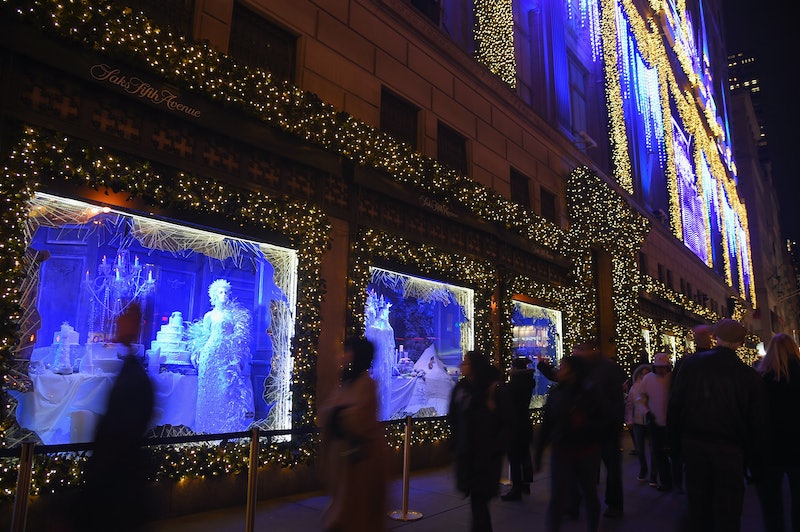 If you've ever been in New York City during the winter holidays, you know one thing for certain: The streets and store windows are decked to the brim with gorgeous lights, scenes, and decor. Now, you can browse New York's holiday windows at home thanks to a new feature from Google. Google created a microsite called "Window Wonderland" which allows you to virtually stroll through the streets of New York and check out all of the gorgeous art and design that tourists flock to on a daily basis. 'Tis the season, right?

If you've never checked out the New York holiday windows in person, know this: These places can get crowded, fast. While scrolling through these images on your computer might not feel as exciting, at least you aren't pushing your way through an enormous family or school field trip trying to peek at what, exactly, is in the Macy's display this year. If you're browsing at home, you also probably don't have a giant pretzel from a food cart or truck in your hands, but I would argue that a lack of crowds is more desirable than a pretzel any day.

The Winter Wonderland site offers users a 350-degree view of the windows of 18 participating stores, including the big names like Bloomingdale's and Macy's. As Chloe Pek notes at Design Taxi, retailers can also opt to have "featured" merchandise from their brands inserted into your virtual stroll, though you can browse Window Wonderland totally for free.

Navigating the Window Wonderland site is super simple. You click "Start Walking" on the homepage, then select which of the 18 storefronts you'd like to choose from, and then navigate through as you would in Google Maps. Another cool part of the Window Wonderland site is that you can view it as a panorama. For instance, if you take advantage of features like Google View or Google Cardboard, you can get a wide view of the streets and shops you can't get otherwise.

The artistry that goes into these displays is no joke. Often each window contains its own unique scene and theme, ranging from nutcrackers to ballerinas to woodland creatures. And when you look up close, the details really make the whole scene shine. You'll see a nice range of cultures and traditions, too; there's no particular bend towards one holiday over another, which makes these displays awesome no matter what your belief system involves.

These holiday windows have been a New York tradition for 150 years, so people invest some serious time and energy into making inch sparkle. According to Kate Silver at the Washington Post, Macy's started the tradition of decorating its windows for the holidays back in 1874. Now, Macy's and their surrounding stores decorate their windows from around Thanksgiving until New Year's Day every year. The displays are lit 24 hours a day, seven days a week, though the stores themselves do close.

New York is known for being a tourist destination in general, and that can be amped up during the winter holiday season, so expect crowds to be intense at certain times of day. But hey -- if you're using the Window Wonderland from the comfort of your own couch, no one is going to elbow you in the ribs to get a better picture of the Sak's display, right?