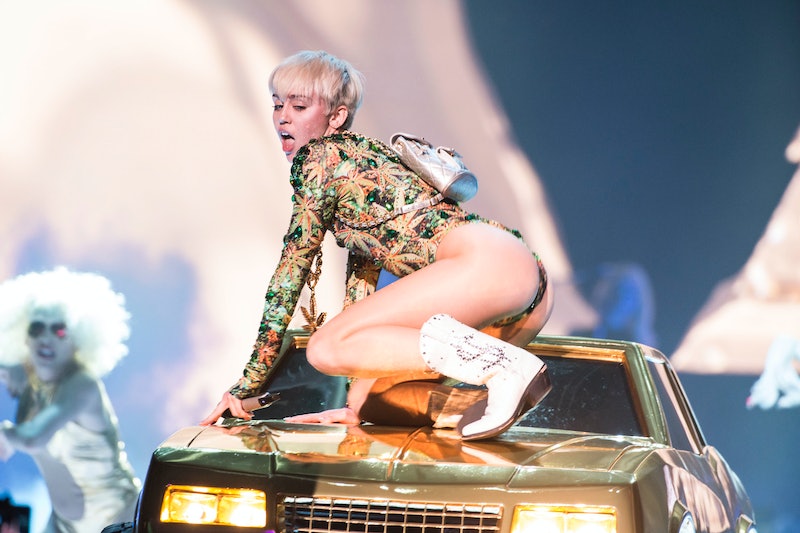 Miley Cyrus can't be tamed. We know this, and we've witnessed it over the past several years, watching her VMA performance, her love of leotards, her inability to keep her tongue inside the confines of her mouth, and most of all, through her performances. If you're lucky enough to catch Miley during her Bangerz tour, you'll see a plethora of raunchy dance moves, elaborate set pieces, and one uninhibited performer. But during her show Wednesday night in Boston, Cryrus traded in sexualized routines for one heartfelt — and heart-wrenching — performance. While singing "Landslide" Miley Cyrus cried over the death of her dog, Floyd.

Miley's dog died the night before, as she told her fans via a group of very sad tweets. She warned fans that her performance Wednesday night would be less than extraordinary, knowing the death of her beloved pup would take a toll on her performance. She took the stage and explained that she and her Alaskan Klee Kai puppy used to listen to Fleetwood Mac together, and performed "Landslide" in his honor.

"It's gonna be hard for me to sing this next song. I'm not sounding myself, I don't feel myself," the "We Can't Stop" singer said.

But while she wasn't "herself", she certainly was a version of herself that we can all relate to. Losing a pet can be extremely difficult, any of us who grew up with animals know just how integrated into the family they become. They are our closest allies, our confidants and our friends. Cyrus showing her softer side by letting her emotions into her song was not only healthy, but probably helped her fan base. We know Cyrus as the hard and playful performer, but her sensitive rendition of the Stevie Nicks classic reminded us all that Cyrus is human. She doesn't just party at Beacher's Mad House and take sexual selfies, she cares deeply for others.