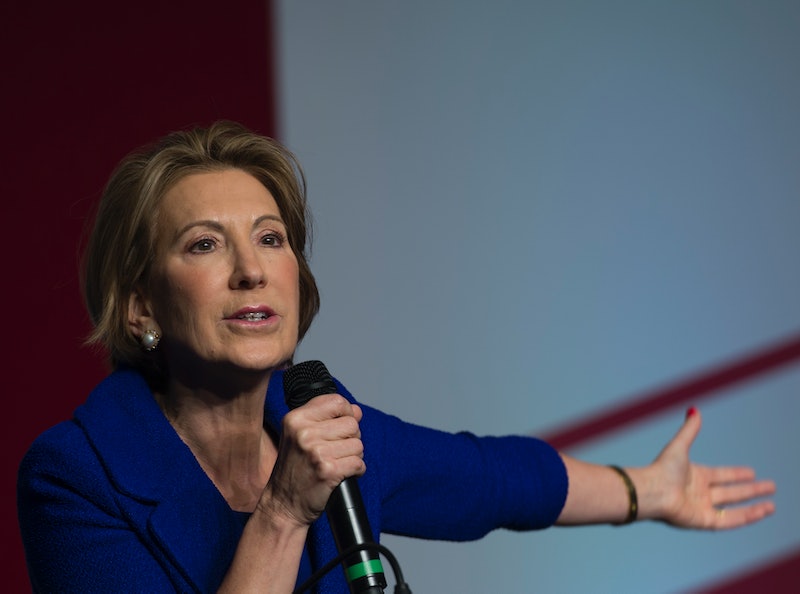 The New York Times reported Monday that President-elect Donald Trump spoke to Carly Fiorina about the Director of National Intelligence position, citing a senior Trump transition team member. According to ABC News, Fiorina — the former CEO of Hewlett-Packard and Trump's opponent during the Republican primaries — reportedly met with the president-elect at Trump Tower to discuss foreign policy and hacking threats.

From what Fiorina told the Times following her meeting with Trump, it seems that the once-intense rivalry between the two business executives is a thing of the past:

We talked about hacking, whether it's Chinese hacking or purported Russian hacking. We talked about the opportunity that the president-elect has to literally reset things, to reset the trajectory of this economy, to reset the role of government, to reset America's role in the world and how we're perceived in the world. And I think it's why he's getting such fantastic people in his administration.

Amidst public backlash following the CIA's assertion that Russia interfered in the U.S. election to help Trump win, Fiorina focused not on Russia during her meeting with the president-elect. Instead, she declared China to be "our most important adversary and a rising adversary."

ABC News reported that Fiorina did not respond to any questions about whether she was up for a cabinet-level position in the upcoming Trump administration. Which means that for the moment, we don't know whether or not Trump will actually nominate Fiorina to be the Director of National Intelligence. The position was created shortly after 9/11, and whoever occupies the role advises the president, the NSA, and the Homeland Security Council on matters pertaining to intelligence and national security.

If Trump does choose Fiorina for the position, the two will have come a long way from where they were during the Republican primaries. At one point during the long primary season, Trump mocked Fiorina's appearance in an interview with Rolling Stone.

"Look at that face!" he said of Fiorina. "Would anyone vote for that? Can you imagine that, the face of our next president?"

Trump later said that he was talking about Fiorina's "persona," and not her physical appearance, but the former HP exec had a sharp response waiting for him at the next debate: "I think women all over this country heard very clearly what Mr. Trump said." Her response drew praise from women along the political spectrum.

But things are different now, as Fiorina said she sees Trump as a "champion":

First I want to say, he has really cool stuff in his office. All of these athletes have given him all this incredible memorabilia. I was particular taken by Shaq O'Neal's shoe, which is huge. I guess it takes a champion to know a champion.

We'll have to wait and see whether Fiorina obtains a position in the Trump administration, but even if she doesn't, she — along with many other Republicans — no longer seems as opposed to Trump as she once was.