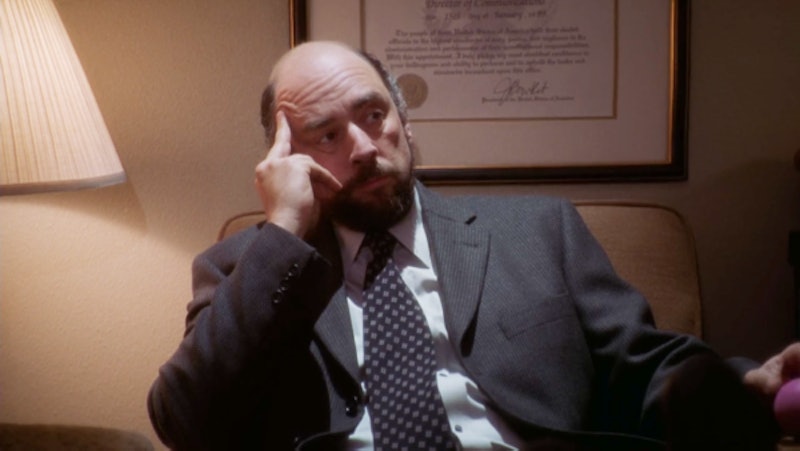 As a huge fan of The West Wing, I find it nearly impossible to choose a favorite character. But one that I always come back to is Toby Ziegler. Any time I think of the moments in the series that hit me the hardest, he was right there in the middle of them, pulling the strings. In fact, I think there's one particular Toby Ziegler-centric episode of The West Wing that doesn't get enough love, and I'm here to give that episode the justice that it deserves.

You might think I'm about to cite "In Excelsis Deo", because the storyline where Toby ensures a proper, respectful burial with full military honors for that homeless veteran who dies with his business card in his coat pocket was one of the strongest of the series. The line "I can only hope so, sir" will stay with me for the rest of my life. But my favorite Toby episode is actually one that's a little less appreciated, and it's called "Commencement".

This one hits near the end of Season 4, in Episode 21, and revolves around Toby's decision to buy his ex-wife Andy her dream home in the hopes that it will make her agree to marry him again and take an active role in raising the twins. It doesn't, of course, because she's a real human being and she just doesn't feel what Toby so wishes she did. Even thinking of Toby's struggle to understand why he can't have what he wants so desperately makes my stomach drop, because every moment of their interactions is seared into my brain. He goes from being so, so happy and hopeful to being so, so destroyed, and it all plays out on Richard Schiff's face in a way that I find, frankly, masterful.

I think the reason I love "Commencement" so much is that it's just the perfect snapshot of all the many layers of Toby Ziegler. You can simultaneously see what makes him lovable — his desire to do a wonderfully generous thing for someone he loves — and what makes him impossible — the fact that he thought he could change his ex-wife's mind with a material possession. He loves her so so much, you guys, but you can see his entire process of realizing that that isn't enough. Andy explains exactly why the two of them will never work as a couple again: "You’re sad. And you’re angry and you’re not warm. You take forever to trust someone." And she's right, which makes it hurt even more.

So many West Wing episodes show audiences the ways that Toby is intelligent and incredible at his job and cantankerous in a lovable way. But "Commencement" reminds us that he is a real person, and that attacking a problem in his relationship the same way he'd attack a problem in a speech — with stubborn belligerence — probably explains why he isn't close to many people. Toby lacks the emotional nuance that would allow him to have the kind of relationship with Andy that she needs, and, even as it broke my heart, I loved that the show never backed down on that.

Toby is a difficult man who has a lot to figure out, and "Commencement" was the first indication I got that the show knew that as well. It painted him as a full person, and gave Schiff free rein to fill him out as the complicated conundrum he was: good at his job, bad at his personal life, and absolutely compelling in every single moment.