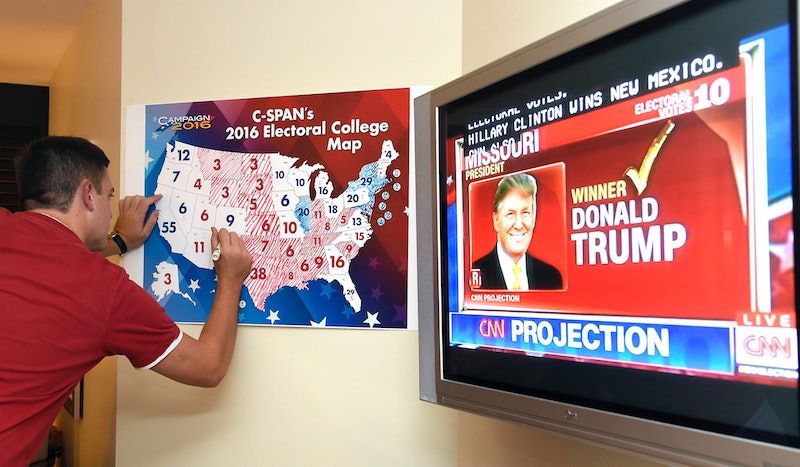 Next Monday, the 538 members of the Electoral College will meet to vote in their respective states for president and vice president of the United States. It's been a long and harrowing road to get to this point, but if you thought this would all be over by next week, think again. Because the Electoral College results aren't announced on the same day as the vote.

Though the votes will be cast on Dec. 19, they will not be announced until Jan. 6, 2017, almost three weeks later. Why does it take almost two months to get from Election Day to the official announcement of who won?

So, we all know that we vote on the first Tuesday of November. This year, that fell on the latest possible date it could, which some joked was ironic because it prolonged even further what was already largely considered an awful election cycle.

The next step is for the Electoral College to meet on the Monday after the second Tuesday in December to cast their votes, a time that was selected by Congress. The electors actually have to cast their same vote on six different certificates, all destined for different locations. Some serve as backups, some are archived and one goes to Congress for the big show.

The 12th Amendment states that Congress must meet in a joint session to count the Electoral College votes. The votes are sealed by each state, and only opened once Congress assembles. It is then that the winner of the election is determined and the official announcement is made.

While this session is largely ceremonial and usually goes off without a hitch, Congress can challenge a vote if at least one member of the Senate and one of the House both sign off on the objection. Additionally, if neither candidate receives the requisite 270 votes to win the election, then it falls to the House of Representatives to decide the president, and the Senate to decide the vice president.

Being the year 2016 has been, there's a chance things won't go so smoothly next week or in January. In light of the recent attention paid to reports that the CIA concluded Russia did attempt to tamper in our election, there are now calls to delay the Electoral College vote until more information is made clear. A group of 10 electors also asked for an intelligence briefing on the situation ahead of having to cast their vote.

While these electors' plea likely won't block Donald Trump's path to the White House, they show the members of the Electoral College are going to make the 2016 election unpredictable until the bitter end.