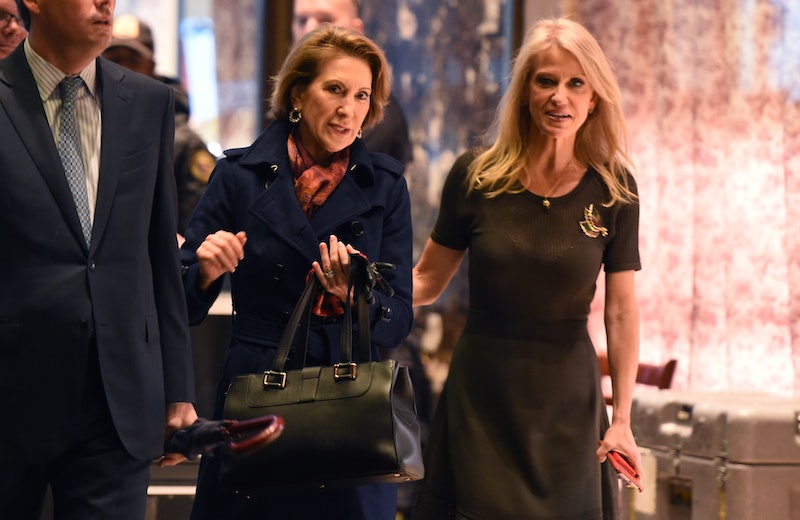 Like Mitt Romney before her, former presidential candidate and Donald Trump critic Carly Fiorina is not letting the president-elect's insults against her stop her from meeting with him and potentially exploring a role in his administration. The Monday meeting between Fiorina and Trump was reportedly to discuss the Director of National Intelligence position, for which, CNN reported, Fiorina is being considered. While many are surprised at the prospect of Fiorina being considered, her comments about reports that Russia influenced the U.S. president election are raising even more red flags.

In remarks made to reporters after the meeting, Fiorina appeared to have adopted Trump's view that the "consensus view" of the intelligence community, as The Washington Post described it, is not correct. Trump's communications director, Jason Miller, called the reports about Russian hacking to be "an attempt to delegitimize President-elect Trump's win."

Fiorina appears nearly as dubious. While Trump attempted Monday morning to cast the reports as no better than a "conspiracy theory" in a tweet, Fiorina focused on suggesting China may be the culprit.

"We talked about hacking, whether it's Chinese hacking or reported Russian hacking," she told reporters. For the record, there is no evidence to indicate that that would be the case; moreover, the CIA made it quite clear that evidence indicates that the Russians are responsible for the hacking. One former CIA chief, Michael Hayden, even called Trump "Russia's useful fool."

To many, President-elect Trump has appeared dismissive of American intelligence organizations and their work since his electoral victory; he has refused to regularly attend intelligence briefings because, in his own words, "I'm, like, a smart person."

Fiorina's comments casting doubt on the CIA finding represent a departure from her previous willingness to openly criticize Trump. After the leak of the now-infamous Access Hollywood tape in which Trump bragged about groping women without consent, she called for his resignation from the ticket, writing, "Donald Trump does not represent me or my party."

Like Mitt Romney before her, Fiorina seems willing to put aside her previous criticism if it means she could possibly get a job with the administration. That gamble worked out poorly for Romney — Rex Tillerson is reportedly the current front-runner for secretary of state nominee — but perhaps Fiorina will have more luck. She has already shown a willingness to align herself with some of the Trump administration's other actions: on Saturday, she issued an endorsement for his Attorney General nominee, Jeff Sessions.

Also, unlike some of Trump's other Cabinet picks, Fiorina does have some relevant experience. She served as the chair of the external CIA advisory board under President George W. Bush — though, of course, she has no actual government experience.

Then again, lack of government experience hasn't impeded the president-elect.