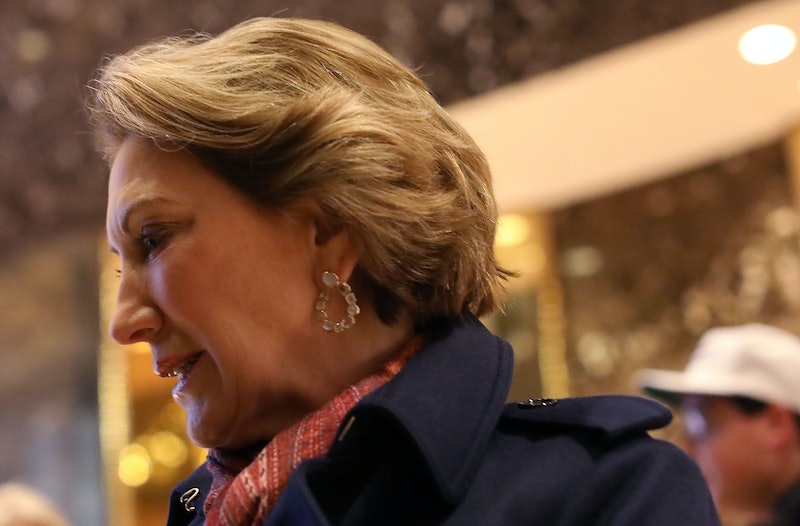 After meeting with President-Elect Donald Trump on Monday, Carly Fiorina appears to be in the running for the position of Director of National Intelligence, according to The New York Times.. But given that Fiorina's background is in business, not in intelligence, many are scratching their heads wondering what kind of director of national intelligence would Fiorina be? What her positions are on critical foreign intelligence matters. And, in particular, what is Carly Fiorina's stance on ISIS?

Fiorina actually had one of the more creative responses of all the Republican presidential candidates when it came to how she would tackle ISIS. In October 2015, she was asked at a town hall in Windham, New Hampshire, by a member of the U.S. military what her plan for combating the Islamic terrorist group was. She responded, "Finally my degree in medieval history and philosophy has come in handy because what ISIS wants to do is drive us back to the Middle Ages, literally."

Speaking further to reporters, Fiorina added, "Every single one of the techniques that ISIS is using, the crucifixion, the beheadings, the burning alive, those were commonly used techniques in the Middle Ages, so we can't avert our eyes and pretend it's an exaggeration that ISIS wants to take its territory back to the Middle Ages but that is in truth what they want to do and are attempting to do."

When Trump became the presumptive Republican nominee back in May, few of us thought we'd ever hear from Fiorina ever again. The former Hewlett-Packard CEO and Republican presidential candidate had thrown her hat in with Texas Sen. Ted Cruz, with her being tapped to be his VP pick should he get the nomination. The last-ditch effort failed, and so too, I personally thought, had Fiorina's political prospects.

But according to The New York Times, Fiorina — who often sparred with Trump during the Republican primary — might have a future in politics after all. That she was being thought of for a top intelligence post was even more surprising. One of the biggest problems she'd be tackling would be America's fight against ISIS, both abroad and at home.

In a December 2015 interview on Fox News's The O'Reilly Factor, Fiorina underscored the need for the government to be able to access private digital files. "We have to give our investigators access to every piece of information they need to track down would-be terrorists and to investigate terrible terrorist attacks like San Bernadino," she told host Bill O'Reilly, and when asked if we needed "a new Patriot Act," she said "the Patriot Act is 14 years old, and technology has moved on, generations, actually."

As for how America should fight ISIS abroad, her interview with O'Reilly suggests that she favors a strong-man tactic that would be shared by Trump. "We need a more effective bombing campaign, which means we have to change the rules of engagement," Fiorina said, referring to earlier rules that attempted to limit civil casualties. (The Pentagon ended up changing these on their own.)

While it would be surprising to see Fiorina appointed to director of national intelligence, this entire year of politics has made it clear to expect the unexpected.