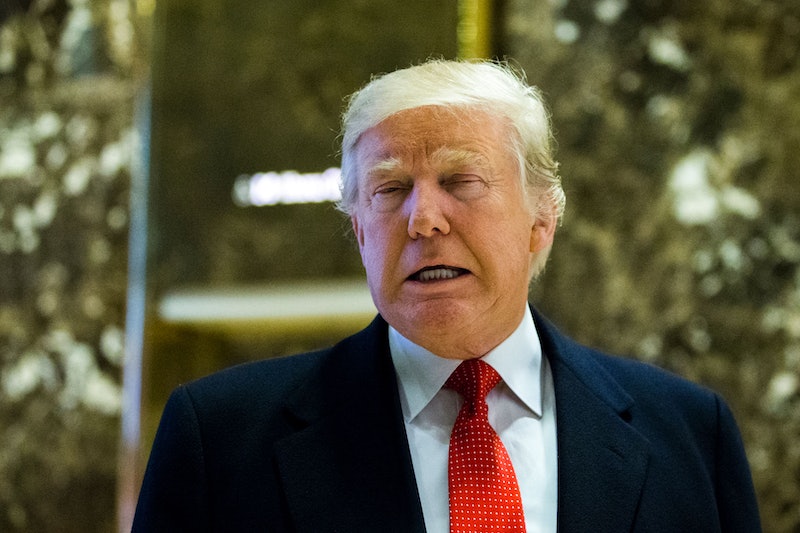 Monday was a typical dreary December day in New York City, but that didn't stop the protesters at the Women and Allies protest from turning out to demonstrate their opposition to President-elect Donald Trump. Citing Trump's denial of climate change, treatment of women, and Trump's refusal to listen to intelligence agency briefings, men and women alike took to the New York City streets for an all-day event with planned speeches, spoken word poetry, and a protest march. Bustle was live at the Women and Allies protest early Monday afternoon at the Trump International Hotel and Tower at Columbus Circle, where protesters convened before the march.

One protester, Jobie, told Bustle her reasons for attending the protest:

[I am here] because I can't stay silent when we have an ignorant man as president who doesn't believe in science. He's a bully, he hates women, he does not believe in equality, and I just can't sit at home and let it happen without getting out.

Other protesters echoed Jobie's sentiments. One protester referenced the Homeland Security slogan, "If you see something, say something." Another, when asked why she attended Monday's protest, referenced a quote by Desmond Tutu, whose famous words also appeared on signs at the protest: "If you are neutral in situations of injustice, you have chosen the side of the oppressor."

Indeed, the consensus among the many people Bustle spoke to seemed to be that protesters were motivated by the belief that passivity or neutrality in the face of President-elect Donald Trump would be unacceptable. A protester named Janna carried a sign that read, "SILENCE BREEDS VIOLENCE. SPEAK UP."

Protesters also expressed hope that the Electoral College would neglect to give Trump the requisite 270 electoral votes that he needs to become president. There are various efforts across the country to make this happen, from faithless electors trying to convince Republican electors to back an alternative candidate to a highly popular Change.org petition to a new effort to insist that electors be briefed on intelligence about Russian hacking.

The protest's message of gender equality was also loud and clear. Feminist publication BUST closed for the day to allow its staff members to attend, and chants of "My body, my choice!" were heard throughout the crowds.

The organization behind the New York protest has also attempted to encourage nationwide protests and a consumer boycott for Dec. 12. A list of the various cities in which protests are planned is available here. Would-be participants who are unable to attend the march were encouraged to refrain from purchasing anything on Monday in a show of solidarity with marchers.