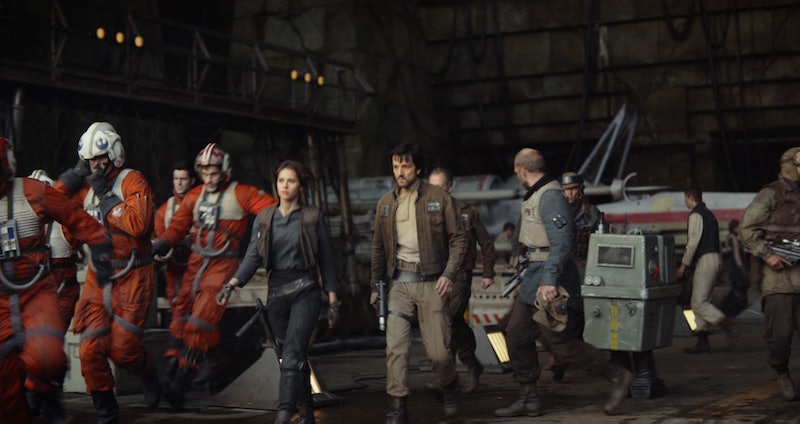 From the moment the makes of Rogue One began talking about the standalone Star Wars story, they've been adamant about one thing: This movie is different. Still, any fan going to the theater on Dec. 17 is going to hope for that familiar feeling. Rogue One still needs to feel like Star Wars. Luckily, the film succeeds in toeing the line between something totally new and different for the galaxy far, far away, and tapping into the familiarity of every Star Wars adventure that came before it. But rather than rattle off spoilers and ruin the whole experience for you, I'll let the cast of the film do the explaining.

For the actor who plays Bodhi Rook, The Night Of's breakout star Riz Ahmed, the film found just the right balance of something old paired with something new. "We can't please everyone, but I've stood here thinking, 'I think we did a great thing, I think we made a movie that respects the Star Wars heritage, but also breaks out and does something a little different,'" he tells me when we sit down at Lucasfilm Headquarters in San Francisco. Ahmed first jokes that the film feels like Star Wars because it's got Darth Vader and the Death Star — this assertion is followed by an excellent Vader impression, to boot — but those points are the obvious markers. There's more to the connection.

"It sits in the lineage but it's not quite part of the family; we're like a weird step brother who listens to very cool music, yeah. Some people think he's a bit too emo, but he's quite tough," Ahmed adds, with a laugh.

The description makes a lot of sense, as time and again Rogue One director Gareth Edwards has pushed that this new iteration is a serious war movie and because it takes place before one of the biggest wars in film history, it's bound to delve into some darker (or more "emo," as Ahmed says) themes, while still feeling incredibly connected to the films we know and love.

For Jyn Erso actor, Felicity Jones, that connection has a lot to do with something a little more practical, namely the unique filming techniques that Edwards brought to the table.

"I feel like we were definitely inspired by the '70s spirit of filmmaking, like guerilla filmmaking, going into different locations and shooting in real situations but also kind of finding a vulnerability in the characters and finding some depth in those characters," she says, also speaking to me at Lucasfilm HQ. A New Hope, which comes after Rogue One, was filmed in the '70s, so accomplishing a similar vibe in the final product is nothing short of essential. And according to Jones, Edwards also shed a lot of the glam of a typical film shoot by often filming without telling the actors where the camera was, in turn forcing them to be entirely in the moment and the action of the film, without considering what their good side might be or how the shot would appear onscreen.

Building on that, Jones' co-star, Diego Luna (Cassian Andor), speaks of Edwards' perspective as one that gets at the heart of the characters, something any one-off Star Wars movie would need to do in order to succeed, and to forge a bond with new characters the way fans have bonded with the originals.

"Gareth asked me to make sure we kept a very realistic tone through the journey of these characters that we would always have this feeling of intimacy with the character and that tonally the film, he wanted a film where the proximity of the camera and the characters is a lot, you are there, living it with them," he says.

Quite fittingly, that dedication to developing characters that audiences can connect with on the ground level just happens to be what Jones says drew her to Star Wars Episode IV, as the film that follows Rogue One in the Star Wars timeline.

"I think that's what's special about A New Hope — I don't know if you feel the same — but they actually, you really invest in them and you really care about them. And I think there was a time in filmmaking where there weren't loads of special effects and so that emphasis has been very much on the relationships and the characters," Jones adds.

"It sits in the lineage but it's not quite part of the family; we're like a weird step brother who listens to very cool music..."

Still, if all this talk of vibes and feelings isn't quite convincing enough, K-2SO actor, Alan Tudyk, has a more concrete approach to the way in which Rogue One delivers that Star Wars feeling.

"X-Wing fighters," he says resolutely, when I ask what moment reminded him most of the past Star Wars films. "I mean I know X-Wing fighters are great, but when they’re fighting and you have that straight-on shot of them in the cockpit and the targeting thing and they’re fighting Tie Fighters in the movie, something woke up inside of me and I really, I really did not expect to have that reaction," says Tudyk.

"All of the design and all of the buttons and screens were taken from A New Hope," he adds, effectively assuring fans (just me?) that at the very least, they will feel at home in the cockpit of an X-Wing in Rogue One. (And if it helps, Tudyk, who is a lifelong fan, was so pleased with the design that he tells me he wanted to take home entire wall panels from the set — "I was like would put this in my house, can I get this goddamn thing off the wall, can I put this in my house? What are you guys doing with them after this?")

But I know there are some of you out there who are still skeptical, and for that, I have one, final suggestion: Look to Edwards (below) and his fierce, loving, and undying dedication to his own fandom.

"He's like a hard core Star Wars nerd," says Ahmed. "So in a way he's a perfect person to kind of tell the story to break the Star Wars mold: Someone who reveres it, someone who will respect the inheritance as well as someone putting a twist on it."

If that's not the dream description for the person holding the reins of the first ever standalone Star Wars Story, I don't know what is.