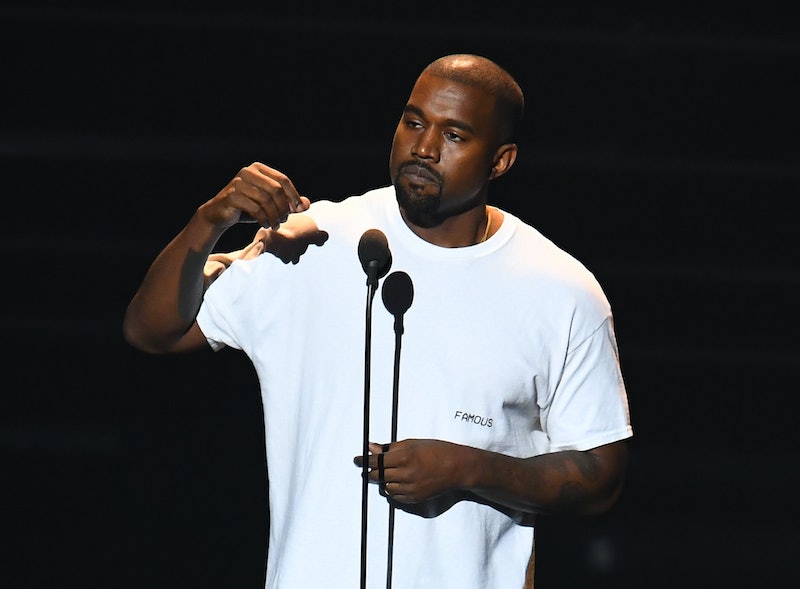 Following his hospitalization for exhaustion in November, Kanye West has been slowly making his way back into the public eye. Last week, the rapper made his first post-hospitalization public appearance at an event at at MOCA's Pacific Design Center in Los Angeles. On Monday, West was spotted in New York City by E! News and TMZ, wearing a large coat and hoodie as he attended to business meetings, but will Kanye West resume his tour dates? There have been rumors and speculation that the rapper will head back to the stage in January to resume his canceled Saint Pablo tour, but E! News said that many unnamed sources say it is "doubtful." Bustle reached out to West's reps for comment and did not hear back in time for publication.

It's great to see West out and about and I think it's a good sign that the rapper and fashion designer is feeling well enough to travel across the country and take business meetings. According to E!, West flew into NYC accompanied by Corey Gamble, who is the boyfriend of West's mother-in-law Kris Jenner. West traveled to an apartment building in Manhattan's Financial District and visited a recording studio, where he greeted fans outside with a peace sign, E! and TMZ reported.

It would be way too soon for West to return to the stage after all that he has been through. While West has made public appearances since his hospitalization, he has not yet spoken to the public, the press, or his fans. Last month, the rapper abruptly canceled the remaining dates of his Saint Pablo Tour after displaying erratic behavior during performances in early November, which included some controversial on-stage speeches.

Earlier this month, TMZ reported that West could be working on new music and it's good to hear that the rapper is slowly getting back on his feet, which will surely end up back on a stage at some point — but not too soon.

More like this
Kanye West Has The Most Kanye Reaction To Kim Kardashian & Pete Davidson's Split
By Jake Viswanath
Kim Kardashian Pays Homage To Kanye West’s Fave Film In New Swimwear Pics
By Bustle Editors and Maxine Harrison
Are John Legend & Kanye West Still Friends? The Singer’s Latest Update Is Candid
By Brad Witter
Shakira Joked About An Early 2000s Video Of Her First Camera Phone Encounter
By Stephanie Topacio Long
Get Even More From Bustle — Sign Up For The Newsletter