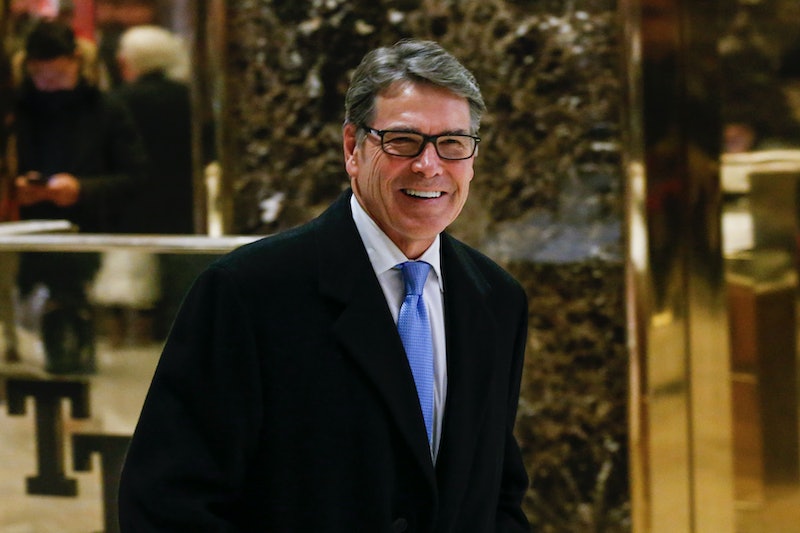 A politician has been tapped to head a federal agency he once wanted shut down. Yes, Rick Perry will reportedly be the secretary of energy, CBS reported Monday night. You'll remember that Perry has an interesting relationship with the department. In a 2012 Republican primary debate, Perry said there were three agencies he'd like to eliminate: education, commerce, and the third he couldn't remember. It was energy, and his on-stage "oops" may have made him more memorable than he could have hoped.

The third agency of government I would — I would do away with Education, the —Commerce ... Commerce and, let’s see. I can’t. The third one, I can’t. Sorry — oops.

But that's actually not the only twist in the selection of Perry to this post. As Bloomberg reported, Perry just so happens to serve on the board of Energy Transfer Partners LP. That's the company behind the Dakota Access Pipeline, which recently saw a stall in its progress when it was denied an easement that would allow it to drill under a water reservoir that the Standing Rock Sioux Tribe relies on for drinking water. Trump supports the completion of the pipeline — he has investments in Energy Transfer Partners LP — and says it would benefit Americans.

The department of energy certainly oversees energy production in the form of oil, gas, and coal, but a large portion of its responsibilities revolve around the nuclear capabilities of the United States. The secretary position has recently been held by scientists, Bloomberg pointed out, including current Secretary Ernest Moniz, who is a nuclear physicist. Perry has a bachelor's degree in animal sciences, but does not appear to have any particular experience in energy or nuclear policy.

There are a lot of twists and turns in the selection of Perry as the secretary of energy. To summarize: He forgot he wanted to eliminate the agency entirely, he serves on the board of a company who is building an oil pipeline, and he has no energy experience to help him in the post, compared to Sec. Moniz, whose specialized area of physics is literally energy research.

But as Trump himself has shown, just because a person has no related experience doesn't mean he won't get the job.