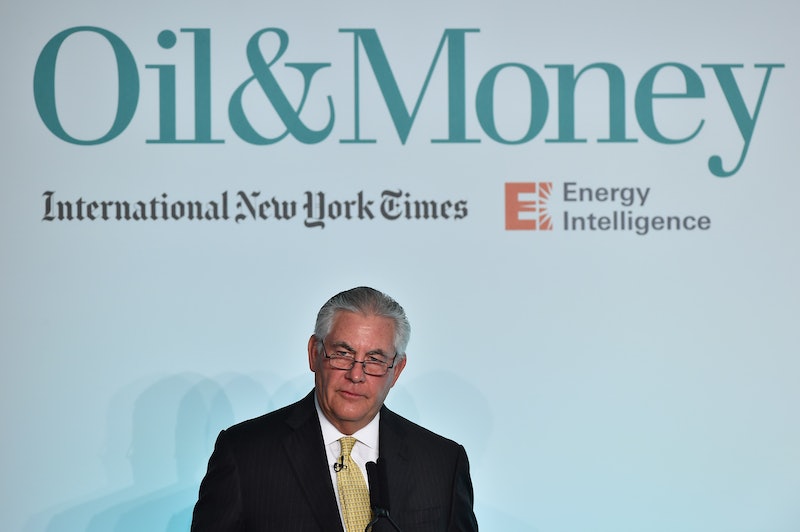 On Monday night, Americans (and the rest of the world) learned that President-elect Donald Trump has selected Exxon Mobil CEO and president Rex Tillerson for his secretary of state. A renowned businessman with strong business ties to Russia — ties that Trump former campaign manager Kellyanne Conway has denied are problematic — Tillerson's appointment is considered by many, including some Congressional Republicans, to be an ethical dilemma given his business relationships. Although his potential conflicts of interest are troublesome, Rex Tillerson's net worth is also cause for concern, given that he's yet another uber-rich cabinet member in the president-elect's increasingly wealthy cabinet.

Tillerson's net worth is estimated at around $150 million, which makes him far from the richest potential member of Trump's cabinet — that title goes to Betsy DeVos, who is worth $5.1 billion (though it is worth noting Trump's nominee for deputy commerce secretary Todd Ricketts, and his estimated worth of $5.3 billion). Not that Tillerson's worth is anything to scoff at, given that the median household income in the U.S. is roughly $56,000 a year and that about 47 million Americans were below the poverty line in 2014.

When you factor in other statistics, like the figure that stated in 2012, a salary of $34,000 would have put you in the top 1 percent worldwide, it makes the wealth gap between Trump's proposed secretary of state and the rest of the world that much wider.

Like everything else with our president-elect, it's hard to tell what Trump's endgame is with selecting rich businesspeople with no policy or government experience for some of the most difficult jobs in the nation. There certainly are bragging rights associated with assembling a cabinet with a combined net worth of $14.5 billion and counting if money is your cup of tea, but one can only assume that it'll take six months or less before Trump realizes that throwing money at diplomacy isn't just ineffective, it actually can constitute a conflict of interest.

There is, of course, a laundry list of reasons why the appointment of Tillerson to secretary of state is problematic — so problematic, in fact, that former Republican nominee and unofficial thorn in Trump's side John McCain has spoken out publicly about his concerns. I'd never wish for the kind of gridlock we saw under Barack Obama's presidency, but it's somewhat of a relief that there's a cabal of Russia critics in Congress who will make Tillerson's confirmation difficult. As with everything else we know and fear about Trump's plans for his presidency, I can only hope that Congress gives him hell.

More like this
Which Cast Member of 'Westworld' Season 4 Has the Highest Net Worth?
By Meg Walters
What Is Megan Thee Stallion’s Net Worth? The Traumazine Hitmaker Isn’t Worried About A Budget
By Hugh McIntyre
Gemma Collins' Net Worth Is Only Going Up
By Catharina Cheung
What Is Brad Pitt’s Net Worth? The Bullet Train Star Now Makes 8 Figures Per Film
By Hugh McIntyre
Get Even More From Bustle — Sign Up For The Newsletter