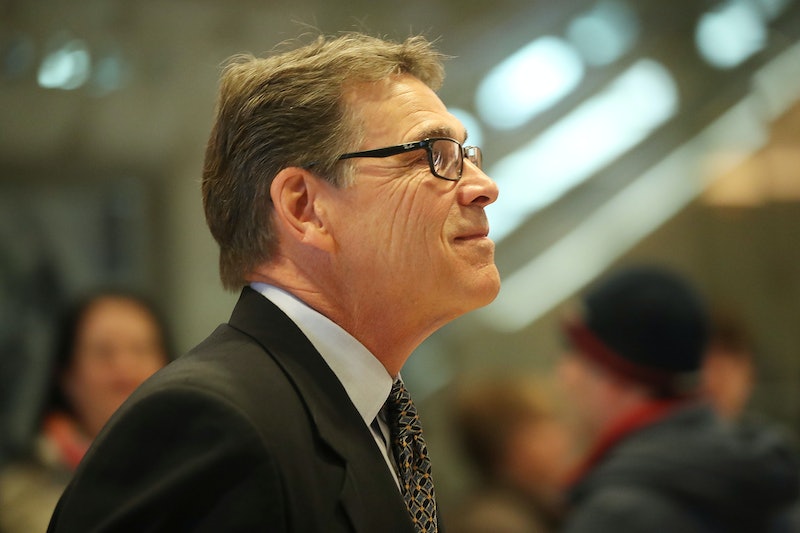 No, the headlines are not a joke; Donald Trump really is messing with us — intentionally or not. Sources told both CBS News and NBC News that after a Monday meeting at Trump Tower, the president-elect decided Rick Perry would make an excellent secretary of the very agency the former Texas governor forgot while running for president in 2012. That would be the Department of Energy, of course, which overseas not only energy research and production but also nuclear programs including military weapons programs. And now Perry will be in charge. Even taking these hilarious Perry energy secretary jokes and memes into consideration, you'll wish Trump had forgotten the department too.

In part that's because when Perry was trying to name it — along with the Departments of Commerce & Education — he was listing the federal agencies he would eliminate. That's right, get rid of completely. Now he's the one running the show. Also troublesome is his position on the board of Energy Transfer Partners, the corporate parent of Dakota Access LLC, the company building the pipeline through North Dakota that No DAPL activists have been protesting at Standing Rock. The Army Corps of Engineers under the Obama Administration has said it will change the pipeline's route, but Trump has said he will intervene if the conflict isn't "resolved" by his inauguration. I doubt Perry, a clear ally of the oil industry, will stand up to him.

So these jokes and memes may be funny, but this appointment like almost all Trump has made is quite serious. If only Trump would just let the current nuclear physicist that's running the Energy Department stay on. But alas. Here's what we have.

1) To Summarize The News

Just in case it wasn't clear what we're dealing with here.

2) Here's Why This Is Funny

It's not just his Dancing With The Stars appearance.

3) But Seriously, Trump's For Real

He's got to be trolling America.

4) A Video Just In Case You Forgot

This is worth rewatching. Perry's "oops" moment truly is cringeworthy.

And it's not just the comparison to Obama's two secretaries of energy who both were scientists.

They are a nice attempt.

7) You Know, 'Cause Of The Glasses

But if we kiss Rick Perry he won't turn into a prince rich in the knowledge of safe storage of nuclear waste.

8) But He Has Other Qualities Too

Hairdryers do use a lot of electricity.

9) Which Saved Him From This Life Choice

He at least got in on his merits.

10) Thank God For Him Experience Did Not Play A Factor

Perhaps that's not fair. He probably is a quick study.

11) Science Is All About Experimentation, Right?

At least he's not anti-burrito like some Trump folk.

12) And There Will Totally Be Crossover Skills

And then he can intimidate whatever scientists who claim to know better than he does about the nukes.

15) But, Like, What Gives When Dance Moves & Not Being Putin's BFF Are Your Best Qualities

To be fair, this isn't his fault. The bar is now just that low. Normalizing...

16) Perhaps To Put His Gaffe In This Year's Context

17) And Then There's This Photo

18) Ultimately I Just Wish This Were Funny

But then you see more conflicts of interest.

If he were in on the joke, that would honestly make me feel better about the whole thing.

At the end of the day, 100,000 people from Michigan, Pennsylvania, and Wisconsin rolled the dice on the unknown, and here we are: welcoming even more of the unknown. You're left wondering what the Trump Administration will look like — although it seems for six months most of his Cabinet members will be spending their evenings reading up on the day job.

That should limit the damage, at least in the short term. And, hey, maybe the Senate can even name three appointments not to confirm. That is if the senators have a better memory than Perry does with federal agencies.