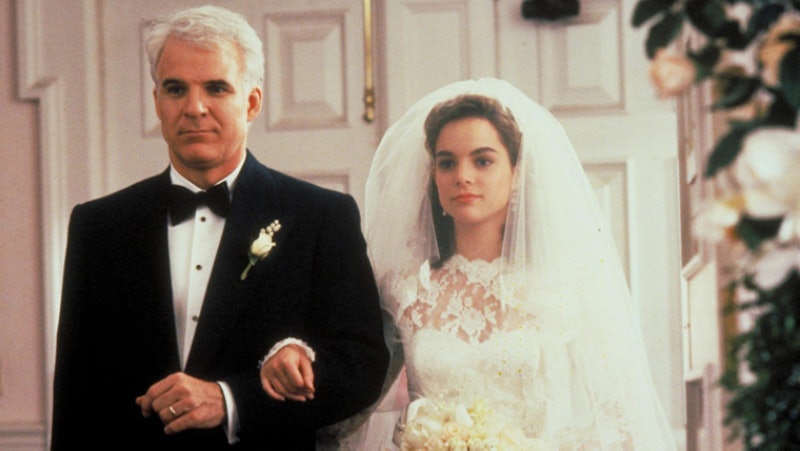 Growing up, I fondly remember Father Of The Bride being one of my Mom's favorite movies. We had an official VHS copy of the movie as well as one that we'd recorded off the TV so that we had a 'backup' for the unlikely event that anything terrible happened to the original. That's how beloved it was in my family home. Though I loved the film as a kid, re-watching it 25 years since Father Of The Bride was released has proven disappointingly troubling. Sure, Steve Martin's performance is hilarious, and there's an unmistakable sweetness to it which is incredibly endearing, but regardless of it's age, Father Of The Bride still feels alarmingly old fashioned. And that's by the standards of both 2016 and 1991, when Father Of The Bride was first released.

Portraying the struggle of George Banks (Martin) as he discovers that his 22 year-old daughter, Annie, is about to get married and, presumably, abandon him forever, Father Of The Bride thrives off how stubborn and archaic George's response to that news is. It's entertaining to see the character scowl and roll his eyes at Annie's starry eyed declarations of romance but it's also disconcerting to witness how controlling he is.

George is so possessive of his daughter in Father Of The Bride, that the entire movie is completely dominated by his troubling view of events. Not only do we witness a young woman's entire life through her Father's perspective, but her wedding is also made inexplicably about him (so much so that when the Priest asks who is presenting Annie for marriage, he answers "I do" as if he were about to wed her himself).

And this, one of the most important milestones of many women's lives, becomes about a Father's supposed loss of his daughter, rather than a celebration of a young woman's maturity, relationship and future. This is an incredibly toxic idea for young women to glimpse in a movie, as it completely strips a young female character of her essential agency, and completely invalidates her worth.

On top of that there's also the troubling suggestion that Father Of The Bride raises in showing a wedding in it's most antiquated of forms — of a Father passing control of his daughter over to the Groom. And though Annie is quick to rebuke this idea of her fiancee being some "overbearing, macho guy" capable of treating her how her Dad does, George's attitude is sadly given credence by how we witness her experiences through his perspective.

For instance, when Annie first announces that she's fallen in love with a great guy and has gotten engaged, her nervous fear of telling her parents is justified when we see George's reaction. Not only he is angry, but belligerently so. Insulting her decision, optimism and choice of partner, George instantly cares little for what the engagement means to Annie, and more about what it means for him.

He can't even fake a sincere congratulations, or simply trust his daughter enough as to simply be happy for her. He had no say in his daughter's very personal decision to get engaged, and he clearly believes he should have been consulted on it. That attitude isn't just controlling, it's frankly a little scary.

George's bizarre upset at being "replaced" by Annie's future husband, leads to him calling himself "Mr. Discontinued" when he meets her fiancee, Brian. As if he's some sort of robot whose prime objective it is to dominate every facet of his daughter's life, and now her fiancee has that job. He even makes the statement, "you stop worrying about her meeting the wrong guy, and worry about her meeting the right guy," as if his daughter's potential unhappiness with a bad boyfriend could be qualified by the fact that at least she'd still be his, if that was the case.

It's worth noting, of course, that the 1991 version of Father Of The Bride was a remake of a movie by the same name from 1950. Starring a young Elizabeth Taylor as the bride and Spencer Tracey as the Father, the two movies share the same structure and characterization, with the 1991 version simply adding some incidental, modern twists to the plot line.

With that in mind it's hardly surprising that Father Of The Bride feels so outdated, despite the slight modifications. The movie, even at it's sweetest, still feels heavy with an overbearing '50s attitude. And that's not just in regards to weddings, marriages or even family dynamics, but also in regards to the basic rights and capabilities of women — especially young women.

Every time that George corrects the definition of his daughter from woman to child, that he disregards her decision making skills, relationship with Brian and basic values, he completely undermines her basic autonomy, her intelligence and her competence at life.

As on screen representations go, that's one which is incredibly galling and harmful for any young woman to witness. Male dominance, possessiveness and control are not qualities which should ever be normalized or celebrated, and sadly Father Of The Bride's portrayal of Fatherhood did exactly that.

More like this
22 Movies On Netflix That Are Perfect For The Whole Family
By Bustle Editors
At 28, Lesley Manville Was Acting, Picketing, & Singing Kate Bush Songs
By Olivia-Anne Cleary
Reese Witherspoon Gave Fans Hope For 'Legally Blonde 3' After This Surprising Movie Inspired Her
By Jake Viswanath
A Look Back At Issey Miyake’s Most Iconic Designs
By Dominique Norman
Get Even More From Bustle — Sign Up For The Newsletter