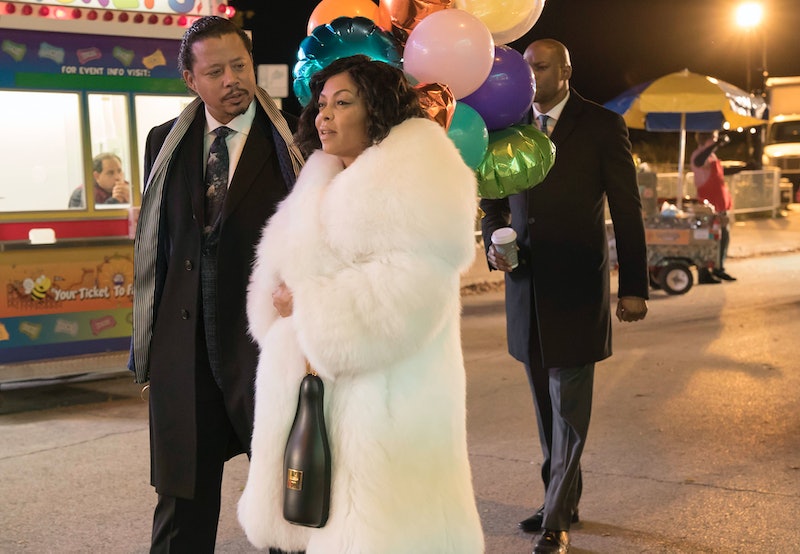 Fox's Empire has brought lots of drama for the Lyon family — from all directions — throughout the first half of Season 3. The hit Fox drama airs its mid-season finale on Wednesday night and Empire will return from hiatus on March 22, according to The Futon Critic's listings, but there hasn't been confirmation of this from Fox yet. That's a long three months without the Lyon family, but the hiatus will give fans to ponder all of the unanswered questions of Season 3 so far — and there have been so many.

Empire Season 3 has introduced so many new faces to interact with the Lyons and they've brought their own drama with a capital D. Nessa (Sierra A. McClain) has shaken things up as a love interest and new artist for Andre, an requited crush for Hakeem, and a new rival for Tiana — especially after last week's episode, in which Nessa replaced Tiana as the main performer at an event. Cookie has been pursuing a relationship with politician-on-the-rise and all-around good guy Angelo DuBois (Taye Diggs), but the new romance has Cookie doing a lot of soul-searching about her past, her roots, and where she feels she belongs in the world. And Angelo's mother Diana (Phylicia Rashad) has brought her own set of opinions to Cookie's world as well.

So what are Empire fans still waiting to find out in Season 3? Take a look at the questions that still need answering below.

Will Jamal Ever Perform Live Again?

Since he was shot last season, Jamal has developed an aversion to performing live, which the series attributes to due to his PTSD symptoms. The character has turned to painkillers and alternative forms of performing for his fans — including a livestreamed concert that was interrupted by family drama (what else?). While Jamal's journey has been compelling to watch each week, I miss watching him command the stage and I hope that he finds his way back in the spotlight soon.

What Is Going On With Andre's Visions Of Rhonda?

Season 3 opened with the revelation that Rhonda had died in the season-finale struggle between herself and Anika, but that wasn't the last fans saw of Andre's beloved wife. Ghost Rhonda has been lurking around Andre's new relationship with Nessa — or is she just grief visions that Andre has been having as he struggles to move on? Either way, the show needs to get to the bottom of these, stat, so Andre can really move on.

Will Hakeem & Tiana Get Back Together?

Empire seems to be flirting with this idea throughout Season 3, but the show has yet to fully explore it. First, Hakeem got jealous over Tiana's beau Gram, even though Tiana and Hakeem haven't been together since Season 1. Then, last week's episode showed Hakeem and Tiana uniting against Andre and Nessa's manipulations — and it looked like there was a possible spark between these two.

When Is Angelo's Election?

Angelo is city councilman gearing up to run for mayor and his mother has even enlisted Jamal to write the campaign song. So, will viewers get to see this campaign and eventual election play out? And what will that mean for Angelo and Cookie?

When Will Becky Get Some Credit?

Poor Becky. First, her boyfriend J-Poppa leaves Empire for another label and then Empire names Xavier as head of A&R — not her, even though she is super qualified. Not only that, Xavier won't stand up for her, Empire's artists, or her decisions, and it seems like Becky is the only one who sees it. When will someone give Becky some credit — and more screen time?

In last season's big twist, Lucious married Anika at Hakeem and Laura's wedding, so that Anika would not be forced to testify against Lucious ever. But as of last week's episode, it looks like the so-called marriage is turning romantic — or at least sexual — after Leah interrupted Lucious and Anika having some (ahem) private time on the dining room table.

I'm hoping those questions will be answered in the second half of Empire's third season — and that the answers will come with some more classic Lyon family moments as well.