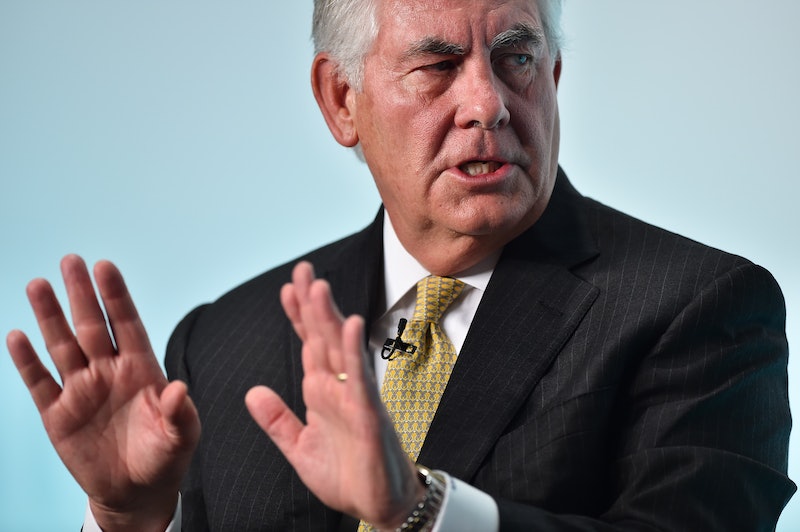 Donald Trump's transition team officially named Exxon Mobile CEO the president-elect's choice for secretary of state early on Tuesday. After days of speculation, Rex Tillerson is officially the man for the job, assuming he is confirmed. (It might be harder than you'd think.) Key Republican senators like John McCain and Marco Rubio have already expressed their concern about Tillerson's connections to Russian leader Vladimir Putin. But there are others that see a different potential problem with Tillerson, specifically if he is supportive of Israel. That's because Tillerson's stance on Israel is pretty much nonexistent, but he has plenty of connections in the region in OPEC states.

The Times Of Israel ran a story entitled "Trump’s choice for State has strong ties in the Gulf, not Israel," which covers the fears that some Israelis and pro-Israel groups have expressed. The argument — put forward by journalist Eric Cortellessa has been echoed in other online publications like JewishInsider.com and Haaretz — is not that Tillerson has any problematic views on Israel, but rather that his preexisting ties to the Arab world in the form of relationships with oil suppliers could influence his decisions.

The main person interviewed in a couple of pieces, including Cortellessa's, was Jewish Community Relations Council of Greater Washington’s Executive Director Ron Halber. Halber is among the American Jewish leaders that view Tillerson with "a degree of wariness," according to Cortellessa's report. He was the only one interviewed, so Tillerson's stance on Israel could be presented with some bias here. Halber told The Times Of Israel:

Tillerson clearly has established business relationships with many of the Arab states. There is no evidence that he has any understanding or sympathy for the US-Israel relationship. Of even greater concern is the fact that he apparently rejects sanctions as a tool in international diplomacy, the key tool in our arsenal that brought the Iranians to the negotiating table.

Of the other possible options Trump had considered (including Mitt Romney, Rudy Giuliani, and John Bolton), Tillerson is the only one without an existing, close relationship to Israel. That is surely troublesome to the Netanyahu government. Also, as mentioned by Halber, there could be concern that Tillerson wouldn't support putting economic sanctions back on Iran — something that Trump advocated for during his campaign. The Israeli government has been strongly opposed to Obama's deal with Iran to remove sanctions in exchange for a halt to its nuclear program.

Not all American Jewish groups have the same concerns. There's been talk of John Bolton being named deputy secretary of state by Trump, according to The New York Times. He is very pro-Israel but also quite rightwing. Pro-Israel group J Street released a statement not about Tillerson's appointment, but about Bolton's potential appointment. "Bolton’s long track-record shows to him to be hostile to the notion of diplomacy itself,” the statement said. “He is an unabashed advocate for premature, unnecessary and dangerous use of military force in the Middle East and around the globe."

While there might not be universal approval of Trump's appointments, there's definitely plenty of attention from around the world.