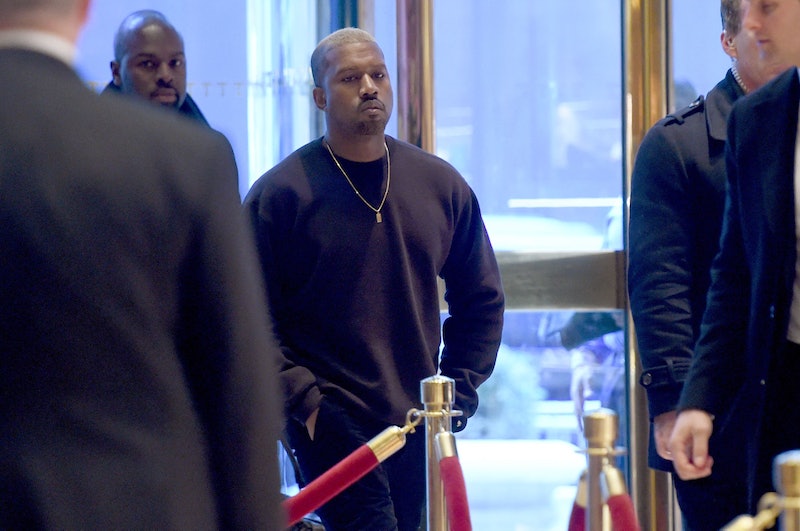 Well, this is... weird. On Tuesday morning, Kanye West showed up at Trump Tower to meet with the president-elect. The rapper and fashion designer brought his sizable entourage, although wife Kim Kardashian did not join him. In mid-November, shortly before spending a week in a California hospital to treat what TMZ reported to be exhaustion and psychiatric issues, West famously announced at a concert that had he voted in the 2016 election, he would have voted for Donald Trump.

The two shared an odd handshake when Trump met West in the lobby. According to TMZ, West had requested the meeting, and Trump had accepted.

President-elect Trump, for his part, has praised West in the past. In a press conference in the months after West's VMA announcement, according to TMZ, Trump said: ""You know what? I will never say bad about him, you know why? Because he loves Trump!... He goes around saying Trump is my all-time hero."

On Tuesday morning, Trump spokesperson Hope Hicks confirmed that the president-elect was, in fact, meeting with West.

Over the weekend, Trump noted that he was "smart" enough to not require daily intelligence briefings, although he apparently made time for West as the president-elect moves towards completing cabinet nominations. On Monday evening, The New York Times reported that Rex Tillerson had been selected for secretary of state, and on Tuesday the transition team confirmed that Rick Perry would be overseeing the Department of Energy. (Never forget that Perry famously forgot that very department existed during an extremely awkward 2011 presidential debate.)

2016 has not ended well for West. In October, West's wife was held at gunpoint and robbed at a Paris hotel. The next month, West canceled a series of shows after a rambling monologue and was admitted to UCLA Medical Center for exhaustion; he was held for more than a week. Since his release from the facility, Us Weekly has reported that the couple are not longer living together, although West and Kardashian have not acknowledged or corroborated these claims.

The couple have two children together.

To recap: In a month's time, Donald Trump will be president-elect. His cabinet includes the former leader of Breitbart and a guy from Dancing With The Stars. His brand-new secretary of state was awarded an Order of Friendship from Vladimir Putin himself. Now, after a difficult time in his personal life, Kanye West — Kanye West — is meeting with the next leader of the free world. West is also considering running for president in the next election season, a prospect that no longer seems far-fetched.

More like this
Are John Legend & Kanye West Still Friends? The Singer’s Latest Update Is Candid
By Brad Witter
Christina Aguilera Took A Powerful Stand At Brighton Pride
By Sam Ramsden
'Scream’s Courteney Cox Has Broken A Major Horror Record
By Sophie McEvoy
Kanye West Has The Most Kanye Reaction To Kim Kardashian & Pete Davidson's Split
By Jake Viswanath
Get Even More From Bustle — Sign Up For The Newsletter