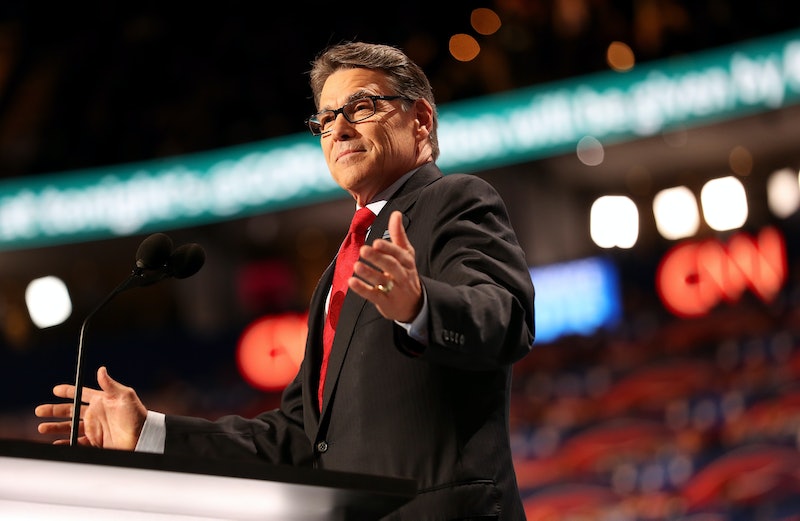 When running for president in 2011, former Governor of Texas Rick Perry famously forgot the name of the Department of Energy when listing government agencies he would choose to abolish if he were to take the Oval Office. Flash forward five years, and President-Elect Donald Trump has chosen Perry to be that very department's Secretary of Energy. But wrapped up in Perry's wish for the demise of his own department is yet another conflict of interest: the Dakota Access Pipeline. What Perry does about DAPL as Secretary of Energy will likely lie within a desire to keep the oil business booming.

Unfortunately, it's entirely possible that Perry's appointment to Energy Secretary will be detrimental for the Standing Rock Sioux tribe. Perry himself has served as the director for Energy Transfer Partners since 2015, the company in charge of the multi-million DAPL project. According to a report from The Daily Caller, Perry also owns $100,000 worth of stock in the Texas-based ETP.

This clear conflict of interest doesn't seemed to have fazed Trump, of course — the president-elect recently came forward in support of finishing the construction of the pipeline, and like his department of energy pick, reportedly also owns between $15,000 and $50,000 in stock in ETP.

The gas and propane company likewise didn't hide its feelings regarding the election of such a controversial ally to the White House. Immediately following Trump's election, ETP's Chief Executive Officer told Reuters: "I view the results of last night's election as favorable not only for our project, but for future infrastructure projects that have been vetted and reviewed as thoroughly as ours has been."

The question then becomes whether President Obama's move to cease construction of the pipeline along the Standing Rock reservation will manage to survive in a Trump presidency. The chances clearly don't bode well — in addition to both Perry and Trump's conflict of interest with ETP, the incoming Trump administration has recently discussed the possibility of privatizing Native American land. This potentially explosive move would in an instance erode more than a centuries' worth of policy that was designed to protect Native American land and its tribes.

Environmentalists argue that Trump's proposal to deregulate drilling and energy production on the whole would not only be catastrophic for Native American tribes, but would all but cease America's contribution to fighting climate change. The Natural Resources Defense Council Action Fund called this type of deregulation "a wish list for big polluters."

Putting Perry at the helm of the Department of Energy appears to be yet another concerning move for an administration already filled with conflicts of interest and scandal. And though the negative, worldwide consequences — for our land, seas, and air — are yet to be determined, it will be up to the American people to continue to fight the Trump administration at every turn.