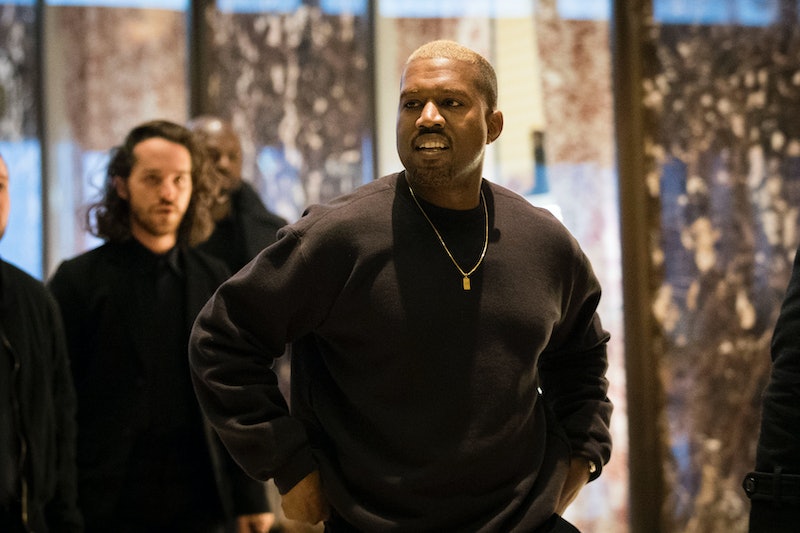 Dear 2016: What on earth are you going to throw at us next? On Tuesday morning, Kanye West himself was spotted entering Trump Tower for a meeting with the president-elect. With just over one month until the inauguration, and with a handful of big names (and former Clinton supporters) refusing to play at the event that will officially make Donald Trump president once and for all, this meeting begs the question: Will Kanye West play at Donald Trump's inauguration?

It's no great surprise that the Trump transition team are having trouble booking any big-name guests for the inauguration, as Variety reports. Most of Hollywood came out to forcefully support Hillary Clinton — Lena Dunham and Meryl Streep spoke about her in glowing terms at the DNC, whereas that guy from Duck Dynasty did the same of Trump at the RNC — and Elton John vehemently denied that he would be performing at the inauguration. Beyoncé, Katy Perry, and Madonna were among other vocal Clinton supporters who aren't likely to welcome Trump into the Oval Office.

Which brings us to: West. Although West has suffered a difficult winter, including an inpatient stay at UCLA Medical Center and the robbery at gunpoint of his wife, Kim Kardashian, he allegedly requested the meeting with the president-elect, according to TMZ. So, what did West want to talk to Trump about? Some ideas...

Or, you know, none of the above. Having praised each other exuberantly over the last 18 months — West said last month that, had he voted, he would have voted Trump, and Trump said after the VMAs that he had nothing but "love" for Kanye West — maybe the two just wanted to meet face-to-face. Take the focus off West's marriage and Trump's cabinet picks. Chat about how they'd mastered Twitter. Shoot the breeze about how they might be going head-to-head in 2020.

At this point, nothing is too far-fetched.

More like this
Are John Legend & Kanye West Still Friends? The Singer’s Latest Update Is Candid
By Brad Witter
Christina Aguilera Took A Powerful Stand At Brighton Pride
By Sam Ramsden
'Scream’s Courteney Cox Has Broken A Major Horror Record
By Sophie McEvoy
Kanye West Has The Most Kanye Reaction To Kim Kardashian & Pete Davidson's Split
By Jake Viswanath
Get Even More From Bustle — Sign Up For The Newsletter