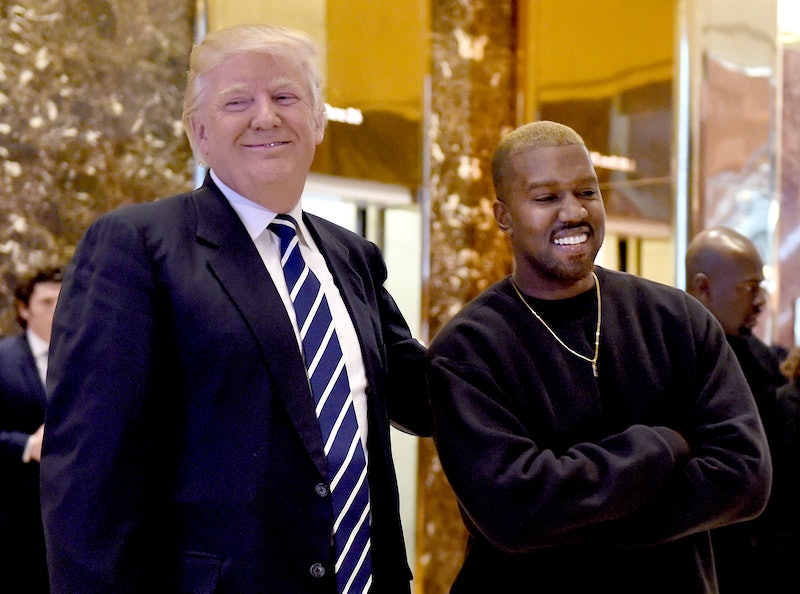 President-Elect Donald Trump and Kanye West met at Trump Tower early Tuesday morning, reportedly to sit down and discuss "life." I can only imagine what kind of "life" the two would talk about, as both often seem to exist in a world entirely separate from reality. But nevertheless, West was spotted entering Trump Tower with a large entourage in tow, emerging again in the lobby with a beaming Trump some 45 minutes later. West's bizarre meeting with Trump truly seems to cap off an even weirder 2016, and thus, a new meme was born.

The surprise meeting comes after a strange month for West, who was hospitalized for exhaustion for a week following a series of bizarre actions from the rapper. To his fans, the most shocking statement of all came when West declared at a San Jose, California show that he didn't vote in the presidential election — but if he had, the rapper would have cast his ballot for Trump. (Stranger was that West donated thousands of dollars to Hillary Clinton's campaign in 2015).

He told the San Jose crowd: "I said something that was kind of politically correct. I told y’all I didn’t vote, right? What I didn’t tell you. ...If I were to have voted, I would have voted on Trump."

Never one to miss having his ego stroked, it seems Trump is capitalizing on the rapper's support. And so now, we have this weird thing happening:

After This Dumpster Fire Of A Year, We Deserve Nothing More, Nothing Less.

Some Speculate The Meeting Looked A Bit Like This:

A Face Only Donald Could Love

It'd Be An Interesting Brunch, For Sure...

You've Got To Be Kidding Me

This Face Says It All

What Planet Am I On?

So that's that strange ending to an even stranger year.