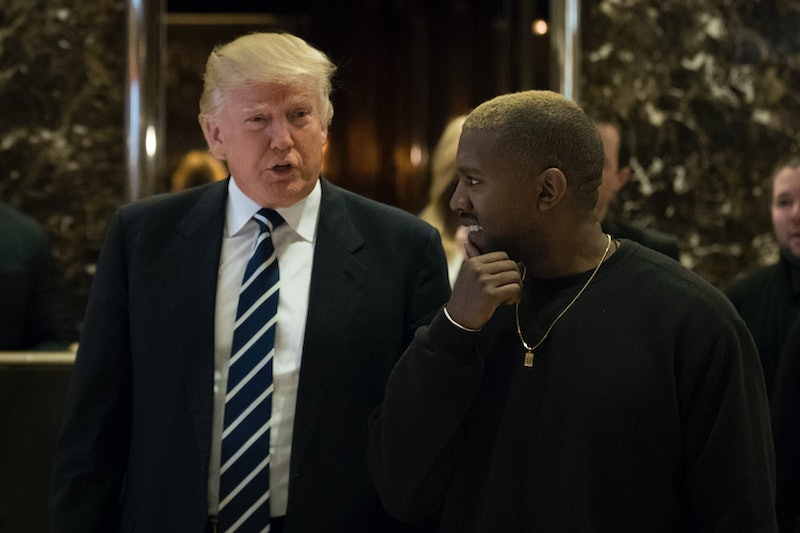 Consider America gaslighted. Just an hour after meeting Kanye West at Trump Tower Tuesday morning, brand-new besties Trump and West bid farewell, with Trump telling the performer, "You take care of yourself. I'll see you soon." (Was there ever a more chilling sentence?) Trump also explained to the waiting press exactly what was going on. Well, sort of: "We’ve been friends for a long time. We discussed life." He described West as a "good man," according to ABC.

The two buds also stopped to take photos. When asked about his meeting with the president-elect, West said: "I just want to take a picture right now," reported ABC. He went on to take a series of pictures, most of which are memes waiting to happen.

Which brings us to the question: What does "life" mean in this context? Neither Trump or West have had a typical winter by any standards, between Trump being nominated to lead the free world in a shocking upset and Kanye canceling gigs and being hospitalized for a week. Are they discussing life changes? Perspectives on life? Tweets about life? Life after the inauguration? Life during the inauguration? Life once 2016 is over and we no longer have a capacity to be shocked?

Were they discussing Life , the David-Attenborough narrated documentary series that serves as a kind of counterpart for Planet Earth?

Could they have been talking about Life , the upcoming sci-fi movie starring Ryan Reynolds?

What about LIFE magazine?

I don't know anything anymore.