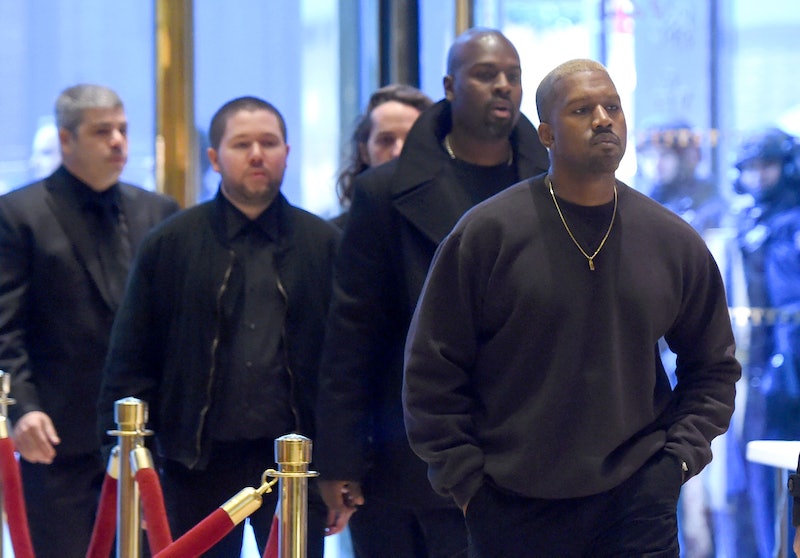 There are plenty of things that one would tag along with their friends to do. For instance, running a few menial errands, driving them to a dentist appointment where they have to be put under a mind altering substance, grabbing a cup of coffee after a long workday. Things that are probably not in the "A Friend's Duty" handbook? Accompanying them on a meeting with perhaps the most controversial president-elect to date. What am I getting at, here? Corey Gamble went with Kanye West to meet with Donald Trump. And really, the only question I have here is why?

West meeting with Trump is a hard enough thing to grasp as is. But the rapper's sorta, kinda potential step-father-in-law being present? Mind blown. So, rather than let this perplex us all the live long day, let us all make sense of why Gamble would be there amidst the flashing lights and orange hair. Like, I could be wrong, but considering his direct connection to the media mogul this, to me, has "Kris Jenner" written all over it. Is it possible that he is there in her stead? Jenner's a much more behind-the-scenes kind of gal, so I don't think she'd ever intend to be there in person. It's not out of the realm of possibility that Jenner sent him as her and the family's representation, so to speak.

While we're on the subject of Jenner and maintaining a certain Kardashian image, perhaps Gamble tagged along to also act as a mediator. Gamble did look to be like somewhat of a guardian while watching West and Trump bid farewell to one another. And Gamble and Trump also shook hands, so there had to have been some sort of communication between the two.

Another reason Gamble could have been in attendance? Perhaps Yeezus needed some emotional support. Yes, Trump professed that he and West are "friends," but that doesn't mean the rapper didn't know the implications of a meeting with his "pal." Gamble could be there in a show of solidarity. Maybe he didn't want to let his friend and almost-family member face the music alone, despite his questionable choice, given the fact that he's been going through a rough time lately, considering he was just recently hospitalized for exhaustion.

Regardless of the reasoning behind it, though, Gamble popping up in the video is certainly a Kardashian-adjacent moment that will live in infamy.