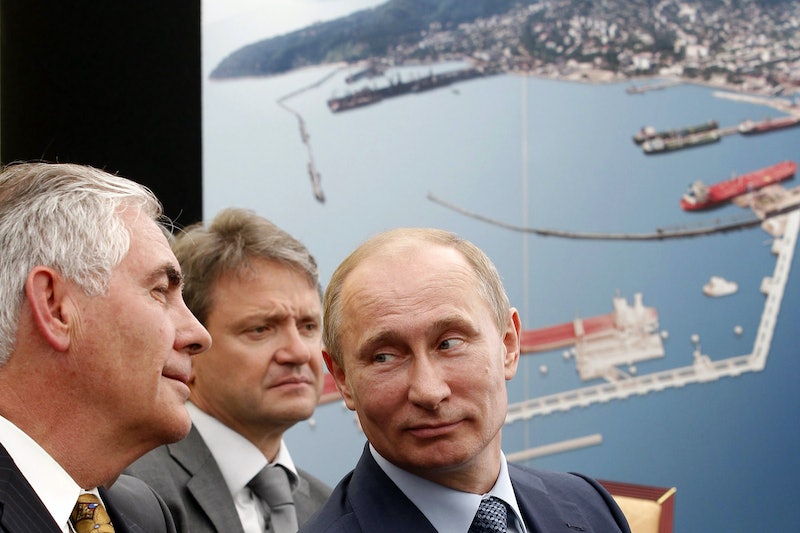 Despite uproar after the leaked announcement this weekend, Donald Trump officially confirmed Rex Tillerson as his Secretary of State nominee Tuesday morning. The CIA's announcement last week of potential Russian interference in the presidential election apparently had no impact on Trump's decision to place a "very close" friend of Russian president Vladimir Putin in charge of foreign policy. That seems concerning for pretty obvious reasons, but some people, like most of the members of Congress, haven't clued in yet. That's why you should call your representative to fight Tillerson's appointment — there's too much at stake not to act.

"Rex Tillerson's career is the embodiment of the American dream," Trump said in a statement released early Tuesday morning, without deference to the media mayhem sparked by Tillerson's ties with Russia. "Through hard work, dedication and smart deal making, Rex rose through the ranks to become CEO of ExxonMobil, one of the world's largest and most respected companies. His tenacity, broad experience and deep understanding of geopolitics make him an excellent choice for Secretary of State."

The situation certainly seems to warrant a thorough look by Congress, but so far only a few representatives have stepped forward to publicly question Trump's decision. Senators John McCain and Lindsey Graham have been two of the most vocal so far, and a few others, including just recently Senate Minority Leader Mitch McConnell, have agreed to support an investigation into Russia's alleged interference of the election.

However, a halfhearted call for investigation from the nation's congressional representatives isn't enough. They need to be spurred to swift and decisive movement, so as to signal to the international community that the United States will not tolerate potential interference with its free and fair elections. The best way to incentivize Congress to do that is call and tell them it's what you want.

One simple, easy thing you can do is call your representative to let them know you don't want Tillerson confirmed without a full investigation of the alleged Russia hacks. You may also want to try calling everyone on this list of well-known Russia hawks if you have the time. Your message doesn't have to be long or complicated, just make sure to clearly state your opposition to Tillerson's appointment and demand for an investigation into alleged Russian hacking. Feel free to use this script directly or modify it for your own needs.

"Hi, my name is _______ and I'm calling to voice my opposition to Rex Tillerson's appointment as Secretary of State. I strongly object to increased ties with the Russian government, and I request a full investigation into its hacking alleged by our nation's intelligence community."

When it comes down to it, this situation between Trump, Tillerson, and Putin is not normal, and it shouldn't be treated as such.