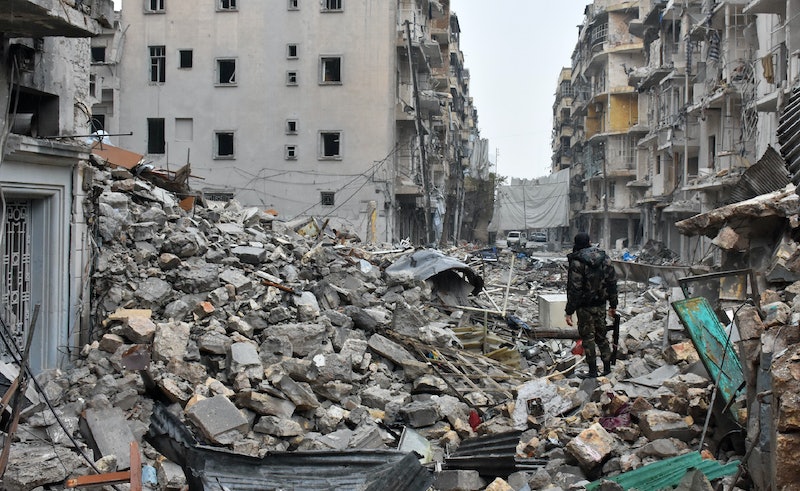 Monday night and Tuesday, the Syrian military bombed a significant portion of Eastern Aleppo, in one of the most horrific periods of the months-long siege. According to reports from the United Nations, at least 82 Syrian civilians were killed. Many more were reportedly injured, and those living in rebel-occupied portions of the city (estimates range from tens of thousands to a quarter million) remain trapped in one of the most dangerous places in the world. The United Nations has claimed that pro-government forces have shot civilians on the spot in rebel-occupied areas of the city, according to a BBC News report.

"Some people are under the rubble, no one can help them. They just leave them under the rubble until they die — these houses as their graves," said Abdul Kafi Alhamdo, an English teacher living in Eastern Aleppo who has posted video blogs about his experiences on the ground. A statement from the office of outgoing United Nations Secretary General Ban Ki-Moon said that he was "alarmed over reports of atrocities" in Eastern Aleppo.

Yet many feel that the global community has not responded adequately at all to the crisis. The United States declined to intervene directly, after seriously considering doing so in response the Syrian regime of Bashar Al-Assad using chemical weapons in 2013. Though the United States pursued a ceasefire in negotiations with Russia earlier this year, attempts to end the conflict by the great powers failed. Chemical weapon use by the Assad regime has been widespread since, as TIME reported, including chlorine gas and barrel bombs as the war has entered its latest stage.

The Obama administration provided indirect support to the Free Syrian Army, a rebel group that formed opposing the Syrian government in the wake of crackdowns on peaceful protests starting in 2011, but has declined to intervene more seriously in the conflict. The United States' role will likely not increase, especially given President-elect Trump's stated opposition to intervening — he said in a presidential debate in October that "Aleppo has basically fallen." He also said after he won the election that "[his] attitude was you're fighting Syria; Syria is fighting ISIS; and you have to get rid of ISIS. Russia is now totally aligned with Syria, and now you have Iran, which is becoming powerful, because of us, is aligned with Syria. ... Now we're backing rebels against Syria, and we have no idea who these people are."

Reports coming from Aleppo through news and social media are heartbreaking:

The Syrian Civil Defense, often referred to as the White Helmets, a non-governmental organization that formed during the civil war providing humanitarian aid to areas ravaged by the violence, called upon the international community to intervene. Specifically, the White Helmets called on Monday for help to aid the over 100,000 civilians reportedly still in Aleppo to escape the city to a safe zone where they can be evacuated from the bombing sites.

The bombing of Aleppo is only the latest and most brutal theater of the Syrian Civil War. The United Nations estimated that at least 400,000 were dead several months ago, and numerous other agencies have pegged the number much higher. According to Amnesty International, over 4.5 million people have fled the country, with an additional 13.5 million within the country requiring humanitarian assistance. This represents more than half of the total population of Syria.

As of this writing, it seems that their calls are being answered. Free Syrian Army spokespeople have announced a ceasefire agreement with Russia to allow for evacuation of the city.

With the Syrian Civil War seeming to get even worse and Syrians being killed by the truckload, the refugee crisis will not go away. The aftermath of this war will be on the world's mind for years to come.

More like this
Why Eurovision 2023's Host City Won’t Be Revealed For A While Yet
By Sam Ramsden and Rachel Mantock
This New TV Show Revisits The Most Controversial True Story From Hurricane Katrina
By Brad Witter
The 12 Best US Open Tennis Outfits Of All Time
By Avery Matera and Dominique Norman
Dr. Anna Pou Is Still Practicing Medicine After Facing Murder Charges
By Brad Witter
Get Even More From Bustle — Sign Up For The Newsletter