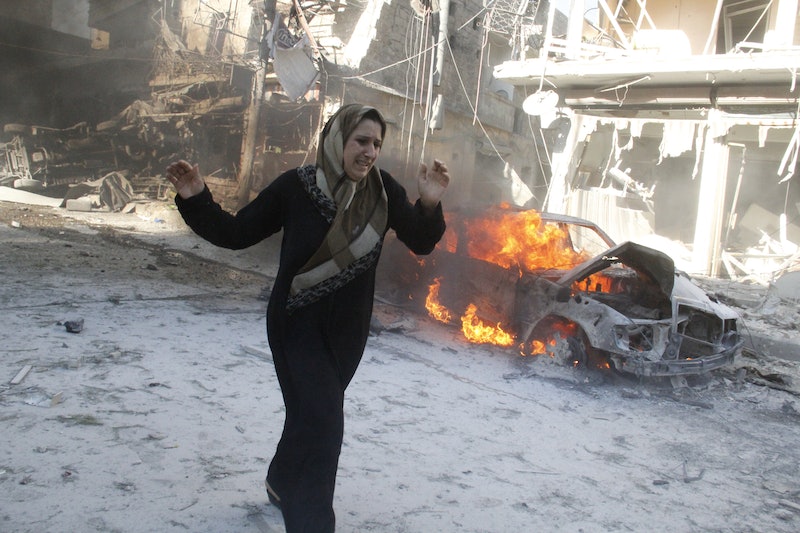 After four years of ceaseless violence and death, the battle for Aleppo is nearing its end. The Syrian government has gained control of nearly all rebel-controlled regions of the city and cornered the remaining civilians and rebels into a small area estimated to be around six square km in size. At least 470,000 people were estimated to have died in Syria by February — a number that is surely to have risen significantly in the subsequent ten months. In addition, roughly 11 million Syrians have been displaced worldwide. On Twitter, activists and civilians trapped in Aleppo have shared messages urging the world to help.

While the desperation is overwhelming in their messages, perhaps the most affecting part is the shared disappointment in the international community's lack of action. "We are facing unknown type if death...." tweeted Rami Zien, who describes himself as an activist and journalist based in Aleppo. "But it's certainly death after everyone let us alone. #mylastwords"

For the past few years, the Syrian crisis has made its way in and out of the media's spotlight. With a news cycle primarily focused on the U.S. presidential election, and specifically on Donald Trump, during the last two years, the tragedy in Syria is often out of the public consciousness.

Here are seven tweets reminding us how much our decision to sit on the sidelines is affecting thousands of human beings every day.

To everyone who can hear me: we are here exposed to a genocide in the city of Aleppo. This may be my last video. More than 50 thousand of civilians who rebelled against the dictator al-Assad are threatened with field executions or dying under bombing. According to activists, more than 180 people have been field executed in the areas that regime have recently took control on by Assad gangs and the militias that support them. The civilians are stuck in a very small area that doesn't exceed 2 sq-km. With no safe zone, no life, every bomb is a massacre. Save Aleppo. Save the humanity.

2. "Everyone In Aleppo City Now Is Depending On You."

In this video, Salah Ashkar describes the horrors innocents are facing in Syria, and explicitly tells us that they depend on us. In another video, he urges everyone watching to protest at embassies and United Nations headquarters.

This journalist's commitment to keeping the world aware of the atrocities in Aleppo is inspiring.

This woman's tweets highlight how shameful it is to feel inconvenienced by news of Syria's tragedy. She continues:

Soon #Aleppo will fade to darkness. Soon you'll hear only one story once more. You'll no longer be "confused" on what's going on in #Syria. Soon you will be told a simple narrative of a secular government with a westernized president who was fighting terrorists. And finally won. They will say, we only killed the bad ones. They will say, the rest love us. They will show you a sea of flags & deafening chants. And say 'Do you see now? We told you.' And you will say, 'Now we understand.' And you will know nothing.

When the videos & images stop coming out of Syria, you should be terrified. It means that the public genocide has become private once more. We know what it's like to live in silence. In darkness. With our truth buried within us. We will slowly learn to go back to that existence. But don't think we will ever forget these years. When people paid with their blood to speak their truth. You should never forget either.

Bana Alabed, a seven-year-old girl in Aleppo, is one of the most recognized victims of the war. Her mother, Fatemah, shares a simple message expressing the abandonment civilians in Syria must all feel.

6. "People Are Being Eliminated."

In another tweet, Mr. Alhamdo also urges the world to protest. "Don't stand without a movement. go in demonstrations to prevent eliminating 150000 people inside Aleppo. Russia and Assad want elimination."

Nobody can blame him for the frustration here. "Thanks world...," he wrote in another post. "You just killed us. By the Power of evil..."

Ready to do something? In addition to protesting and calling or writing to those in power, there are many other things you can do to help Syria.