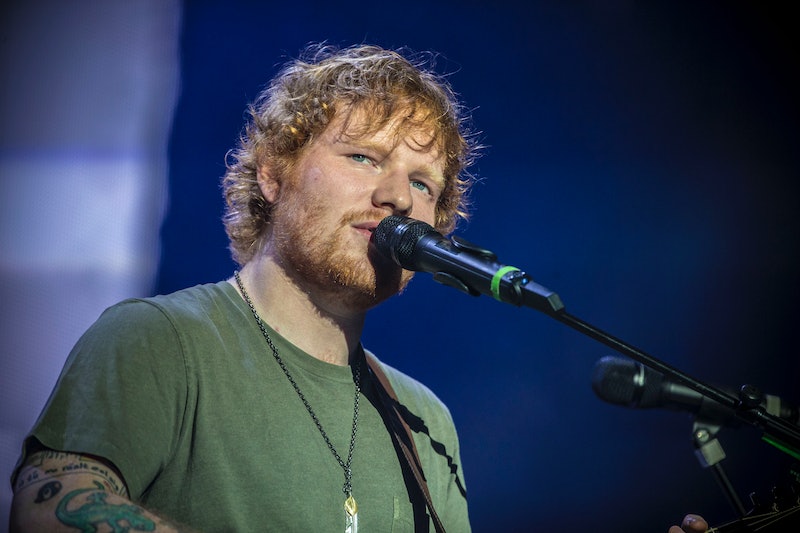 It's hard to believe, but Ed Sheeran has been on hiatus from social media for a whopping 52 weeks. Yes, you mathematicians you, that equals a whole damn year without the red-headed Brit blessing our Instagram feeds. It would appear that the singer was also feeling the magnitude of a year sans social media apps, because he went and did something about it. On Monday night, Sheeran returned to social media, but did so in the most mysterious of manners.

Rather than post a cryptic caption or a picture of himself looking all aloof and pensive, Sheeran took a different approach. The singer literally just uploaded a straight-up color block of light blue to his account. There was no explanation or preamble, just a blue square, which also happens to be his new icon. He did the same on Twitter, proving that this was way more than an accidental butt upload.

It's certainly a different approach for Sheeran, who is typically pretty straight-forward about his endeavors, but I suppose a year away from the spotlight can do that to a person. And I, for one, am totally intrigued, especially because it smells like some Taylor Swift-style promotion for a new album.

If you recall, way back in 2014 when Swift was about to release 1989, she started dropping cryptic posts that got everyone to lean in and listen a little bit closer — except she did it in the form of "clues," which was pretty darn cool.

And, as we all know, it wouldn't exactly be strange if Sheeran would adhere to her clearly successful tactics. The two are and have been quite good friends.

In fact, The Telegraph also pointed out that Sheeran's all-blue posts have "prompted suspicion" about a potential album. The publication reports that Sheeran could be releasing an album in January. And, once again, that fits right in with Swift's 1989 strategy. She started giving out these "clues" in August 2014, but her album wasn't actually released until October of that year.

So, if we're going by the Taylor Swift model, Sheeran is right on track for his cerulean-inspired new album release.

More like this
Gemma Collins' Net Worth Is Only Going Up
By Catharina Cheung
Someone Must Pay For What Happens To Bad Bunny In 'Bullet Train'
By Arya Roshanian
Lauv Is No Stranger To Taylor Swift, Drake, Ed Sheeran, & Fame
By Alyssa Lapid
Beyoncé Sent Flowers To “Masterpiece Genius” Madonna After The “BREAK MY SOUL” Remix
By Grace Wehniainen
Get Even More From Bustle — Sign Up For The Newsletter