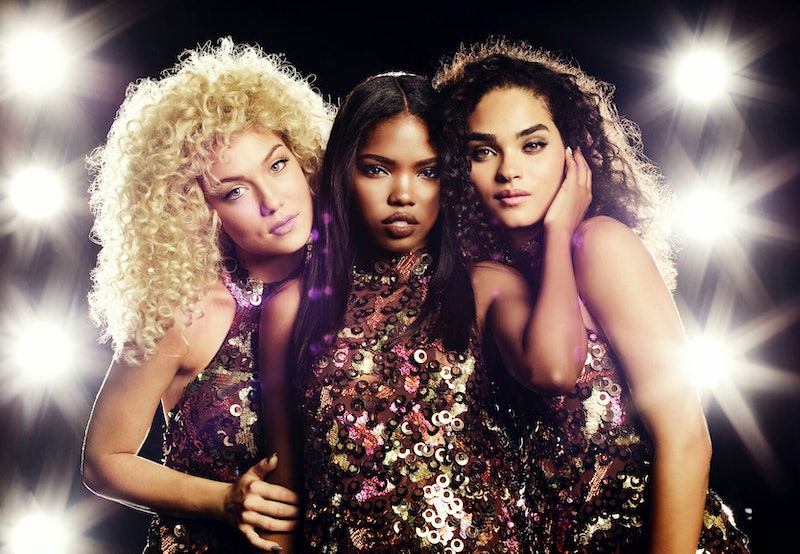 Following Empire’s standout three-season run, production mastermind Lee Daniels will unveil yet another musical undertaking with Star on Wednesday, Dec. 14. The FOX drama centers on three young singers desperate for stardom, but Daniels has promised it’s not a carbon copy of its sister show. Like Empire, the cast of Star boasts a mix of established actors and Hollywood newcomers, plus a soundtrack stuffed with original music, but the comparisons end there: Where Empire is set amidst the glitz and glamour that comes after you’ve carved a name in the industry, Star exposes the gritty, cutthroat climb to get there.

Star, a tenacious 18-year-old who grew up in the foster system, tracks down her orphaned sister, Simone, and Instagram bestie Alexandra, a rockstar’s runaway daughter. Together, they form a girl group and relocate to Atlanta, where they crash with Star and Simone’s godmother, land a seedy, washed-up manager, and begin to navigate the ruthless world of music. Household names like Queen Latifah and Lenny Kravitz appear in supporting roles, but the series is toplined by three fresh faces: Jude Demorest, Brittany O’Grady, and Ryan Destiny. Before diving into Daniels’ next breakout, get to know the leading ladies and their buzzy counterparts below.

You may not immediately recognize Demorest’s name, but you’ll definitely recognize her credits: she co-wrote Fifth Harmony’s smash “Work From Home,” which ruled the Hot 100 — and the radio — earlier this year. She’s also picked up appearances in Disney’s Jonas and Nickelodeon’s Hollywood Heights, plus a recurring part on TNT’s Dallas reboot, but Star will mark her first major on-screen role.

Another newcomer, O’Grady’s biggest get thus far was a recurring role in mystery series The Messengers , though she also appeared in an episode of The Night Shift and Trophy Wife. She portrays Star’s younger sister Simone, who dreams of the day Star will return and rescue her from her abusive foster home.

Ryan Destiny is best known for her leading turn in 2015’s A Girl Like Grace , where she starred alongside Raven-Symoné. Her prior credits include a six-episode stint on AMC’s short-lived crime drama Low Winter Sun and a minor, one-episode appearance in The Wannabes Starring Savvy, so she’s still relatively fresh to the screen. Here, she plays Star’s Instagram bestie Alexandra “Alex” Crane, an affluent 20-year-old from New York.

Already a star in her own right, Queen Latifah’s near three-decade reign has earned her a Grammy, an Emmy, and an Oscar nomination, plus a slew of other illustrious awards. If you don’t know her as the voice behind hits like “Ladies First” and “U.N.I.T.Y.,” you’ll recognize her from Hairspray, The Perfect Holiday, The Secret Life of Bees, or any of the other the countless films she’s starred in. She’s made episodic stops on shows like Entourage, 30 Rock, and Hot In Cleveland, but aside from her hosting gig on The Queen Latifah Show, hasn’t appeared in a main cast role since ‘90s sitcom Living Single. In Star, she plays Carlotta Brown, an Atlanta beauty shop owner who doubles as a stand-in mother for the girls.

Naomi Campbell first carved a name for herself as a big-time supermodel, though she’s dabbled in television and film over the years. She last made a special guest appearance as Claudia Bankson in American Horror Story: Hotel, and now she’s tackling the part of Rose Spencer, Alex’s mother.

Tyrese Gibson is most prominently known as Roman Pearce from the Fast and the Furious and Robert Epps in Transformers — two of the highest grossing film franchises. He’s also a five-time Grammy-nominated recording artist, and scored his first No.1 album last year with seventh record Black Rose. He’ll play Pastor Bobby Harris, a leader and confidant to many in his congregation.

Though his resume is nearly 60 credits long, McCrary will forever be known as the Winslow’s eldest child, Eddie, from ‘90s classic Family Matters. He most recently graced Young and the Restless, Anger Management, and The Leftovers, and will appear in Star as Otis Leecan, Simone’s foster father.

This prolific musician needs no introduction. Over the course of his 30-year career, he’s released 10 albums, sold millions of records, and won multiple Grammys. After making cameos in projects such as The Rugrats Movie (1998) and Zoolander (2001), he made his first major film debut as Nurse John — a supporting role — in 2009’s Oscar Award-winning Precious, then went on to portray Cinna in The Hunger Games franchise. As a guest star, he’ll play Roland Crane, a legendary rock star and Alex’s father.