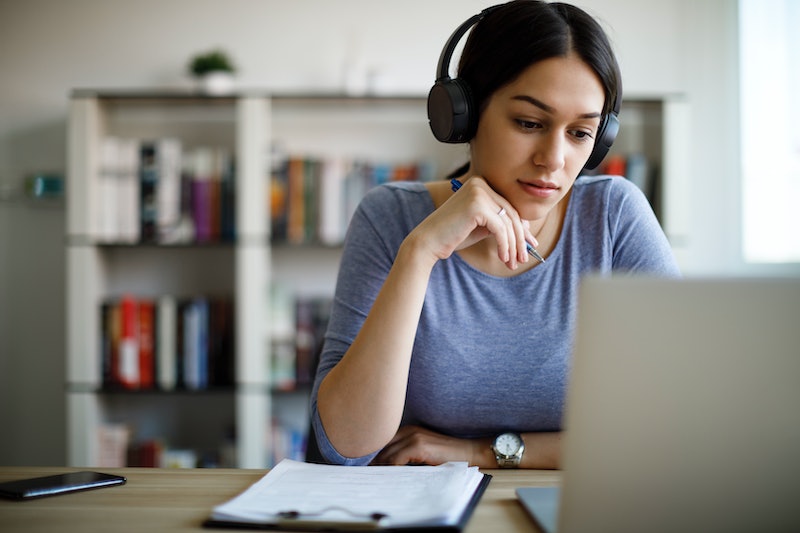 When you think about the many millions of songs that exist in the world from a combination of just 12 notes, and then consider how deeply and differently all those songs can affect our mood, it's kind of mind-blowing. Because according to research, there are ways music can affect our concentration and alter our psyches of which you probably aren't even aware. Think about it: If we could just tap into what works for each of us, then there's definitely a more productive me and you somewhere out there in a parallel universe smashing digital targets with our online boss while listening to Blue Ivy's second album on cordless speakers.

In any event, plenty of people swear by having a soundtrack on in the background to help them focus when they're studying for an exam, working on their office computer, or completing household chores. Others, though, can't get their head around trying to focus on a single task whilst trying to enjoy music as well — for many, it's just distracting. But what makes the difference? The good news is that there's actually plenty of more research on the matter. In case you're wondering what to put in your next Spotify playlist, these scientifically-backed pointers might give you some ideas:

A 2007 study from Stanford University published in the journal Neuron found that music engages the areas of the brain linked with paying attention, making predictions, and updating memory. However, the type of music that helped create this effect was very specific, indeed: Accoridng to a press release, the short symphonies of an "obscure 18th century composer," William Boyce, did the trick.

A study of 118 high school students who found that performance in various tasks was better when completed to music than when completed in silence or in spaces with background noise — for extraverts. Introverts had a harder time completing the tasks when there was music playing. And the music with which they tested this theory? UK Garage. (A favorite sample of mine is above.)

Your Brain Prefers Funk And Pop

An article by the Guardian cited research by scientist Maria Witek, who discovered that our brain's concentration levels match well with music that makes us want to dance — but not too much. Simple, monotonous one-beat music doesn't cut it because of low syncopation levels, but middle ground funk and pop is perfect for completing work to, apparently. James Brown it is.

But It Doesn't Really Like AC/DC... If You're A Man

A recent study of 352 volunteers playing the game Operation while listening to three types of sound — a Mozart piece, "Thunderstruck" by AC/DC, or the "sound of an operating theatre" — found that the sounds had no effect on the performance of female participants. But the male participants? They ran into trouble specifically while listening to "Thunderstruck": They were slower and made more mistakes, compared to the guys who were plugged into the dulcet tones of Mozart or the ominous sound of an operating theatre.

But If You're Anxious, Try Classical

The Independent reported that for sufferers of anxiety, working to a Haydn string quartet can have calming effects on an individual.

Perhaps the lesson in all of this research is as much about knowing ourselves as it is about the music: The outside noise will affect you differently depending on who you are. But if you can figure out exactly what works for you? You'll likely be able to boost your productivity — and probably make work a lot more fun, too. If you're going to spend the day getting stuff done, you may as well rock out at the same time, right?

More like this
Ashamed Of Your Screen Time Stats? Here's How To Change That
By Alexis Morillo
Flip Phones Are Gen Z's Favorite New Nightlife Accessory
By Maria Santa Poggi
These Are The Fastest Electric Kettles You Can Buy
By Margeaux Baulch Klein
11 Super Bowl Instagram Captions To Use On Game Day — Even If You Don’t Like Sports
By Alexis Morillo
Get Even More From Bustle — Sign Up For The Newsletter
From hair trends to relationship advice, our daily newsletter has everything you need to sound like a person who’s on TikTok, even if you aren’t.