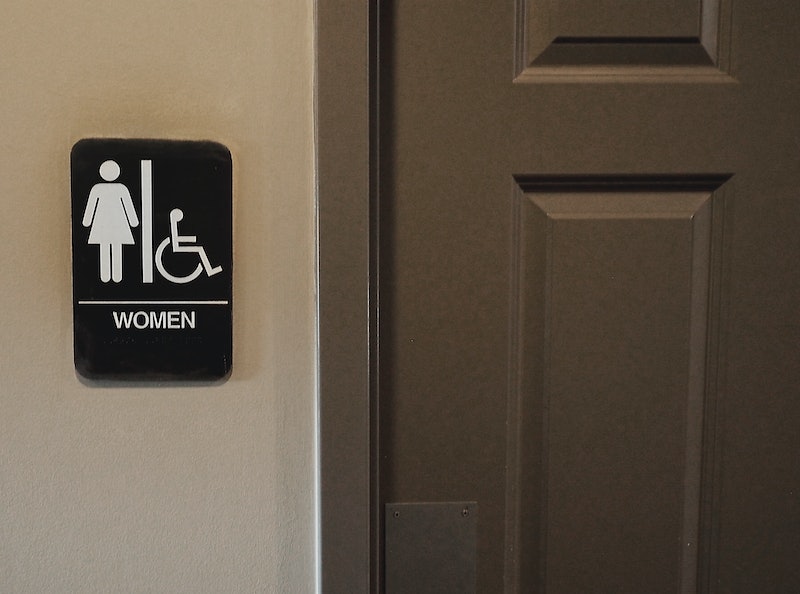 It seems like any abortion news coming out of the rest of this year is bound to be disappointing. Following the passing of Ohio's Heartbeat Bill in the state's House and Senate, where its backers cited President-elect Donald Trump's victory in emboldening them to take on what would have been the country's most restrictive abortion legislation, things are getting a little out of control. Oklahoma is taking a shot at reducing abortion rates, but its methodology is pretty backwards. The state will be requiring certain public places to post informational signs in bathrooms, alerting pregnant women where they can receive services in order to carry their pregnancies to term, thanks to an act passed earlier this year.

The real kicker is that the state didn't approve funds for the signs, so now the burden will most likely fall to the businesses affected. According to the AP, the signs would read:

There are many public and private agencies willing and able to help you carry your child to term and assist you and your child after your child is born, whether you choose to keep your child or to place him or her for adoption. The State of Oklahoma strongly urges you to contact them if you are pregnant.

They would also include the website for the Health Department at the bottom.

Starting in January 2018, hospitals, nursing homes, restaurants, and public schools will be required to hang the signs in the bathrooms. The mandate is part of the Humanities of the Unborn Child Act, which was passed in June. Overall, the bill seems to focus on the state providing informational material to residents to reduce abortion. According to reporting by the AP, businesses in Oklahoma are less concerned about the material printed on the signs they would have to hang in their restrooms than the potential cost of creating them. The senator who sponsored the bill even admitted it needs to be refined in order for it to be successful.

Another part of the act mandates that the state will be required to provide educational resources in schools in order to ultimately eliminate abortion. It's always a scary thing when states think that an effective way to curtail abortion is when women are already pregnant. The state should instead be investing in long-term birth control options for young girls and women, which has been shown as an effective way to reduce abortions. Until states start being more concerned with providing safe and legal abortions to women, and the focus is on not restricting abortion, but providing ways to prevent it from being needed in the first place, we will see more and more of these types of laws starting to creep in.