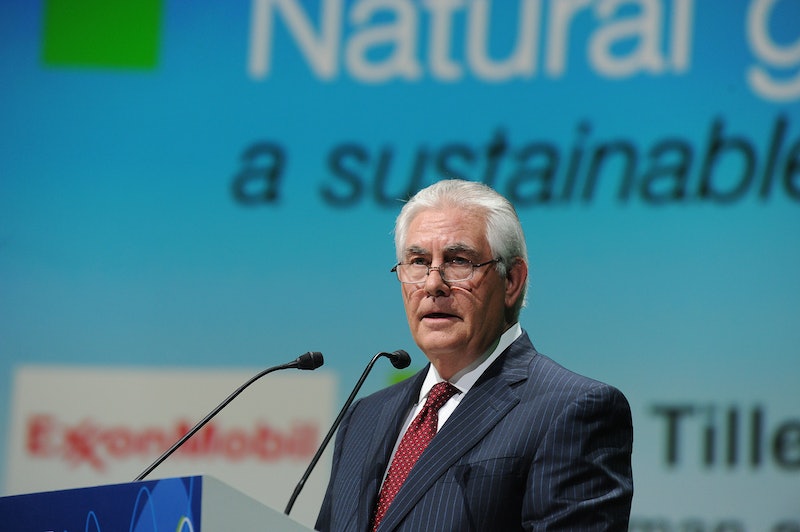 Since he's been CEO of the massive oil company Exxon Mobil for a decade, it should come as no surprise that environmentalists oppose Rex Tillerson being named secretary of state by Donald Trump. If one searches for petitions protesting his future involvement in the president's cabinet, almost all of them have been created by organizations battling climate change and working to conserve forests, clean water, and animal habitats.

In 2012, Tillerson secured a deal between Exxon and Russian oil company Rosneft worth roughly $500 billion, but the partnership fell through after the U.S. and European Union imposed energy sanctions on Russia in 2014. The fallout reportedly cost Exxon $1 billion. Environmental groups worry about Tillerson's ability as secretary of state to overturn the sanctions placed on Russia in favor of profitable business ventures. In addition to his ties to Russia, Exxon's noncompliance with the Paris climate agreement and the company's history of denying climate change are other points of contention for environmental activists.

Annie Leonard, executive director of Greenpeace, called Tillerson's appointment "an affront to global progress" and said that it "will place the US economy, our security, and our standing in the world in the same failing predicament Exxon is in right now." Earthjustice President Trip Van Noppen released a statement saying, "Rex Tillerson and his company are disproportionately responsible for unconscionable backsliding and delay on climate action. A lifelong employee of Exxon, Tillerson has overseen the company's aggressive attack on state Attorneys General who are investigating Exxon's deception regarding climate science. His company is a main sponsor of the false debate that climate change-denying EPA appointee Scott Pruitt and others are using to slow crucial progress."

This is tantamount to putting the world's largest oil company in charge of America's foreign policy. If Exxon takes control of the State Department, they can undo all the climate progress we've made at the international level. They’ll be able to wield the Department as an arm of the fossil fuel industry, opening up new oil and gas development around the world and crushing dissent.

This group's petition can be found here. The petition's reasoning is summed up as:

ExxonMobil is a major player in the fracking industry, and #ExxonKnew climate change was a problem for decades, but covered up the evidence. Tillerson infamously sued to keep a fracking project out of his backyard, but seems happy to profit off fracking in other people's backyards. ExxonMobil's CEO has no place in the State Department.

What will the world think if our next Secretary of State is the leader of a company suspected of defrauding and endangering generations of Americans — and people around the globe? Rex Tillerson has denied Exxon’s involvement in silencing climate science and has continued funding groups that block the clean energy transition, such as the American Legislative Exchange Council.

News of Tillerson’s nomination is a clear signal that Trump is working to assemble a team that will act fast to dismantle crucial environmental protections, giving polluters free reign to poison our air and water. If oil cronies like Rex Tillerson and Scott Pruitt (Trump's EPA nominee) are confirmed by the Senate, American communities will feel the impacts. More kids will be at risk for asthma. Thousands of people will die early from exposure to pollution. Our nation’s endangered species will be put at even greater risk of extinction.

The petition Greenpeace links to in this tweet is hosted by blocktrumpscabinet.com and was created by multiple organizations.

The nomination of Rex Tillerson, CEO of one of the largest and most environmentally destructive fossil fuel corporations in the world, to serve as the United States' top diplomat is not only unprecedented – it’s dangerous and irresponsible. Tillerson’s nomination cements the fact that clean air, clean water, and a safe climate are public enemy number one in Trump’s America.

Unlike the other organizations mentioned in this list, Exxon Knew is solely dedicated to bringing Exxon to justice for allegedly funding the spread of misinformation about climate change, despite knowing climate change to be a reality. Their petition demands an investigation of the corporation.

Recent reports have shown that Exxon knew about the threat of climate change decades ago. Yet over the course of nearly forty years, the company has contributed millions of dollars to think tanks and politicians that have done their best to spread doubt and misinformation — first on the existence of climate change, then the extent of the problem, and now its cause. If Exxon intentionally misled the public about climate change and fossil fuels, then they should be held accountable. We’re calling for an immediate investigation.

As you can see, there is at least one group of activists planning on holding Tillerson accountable.