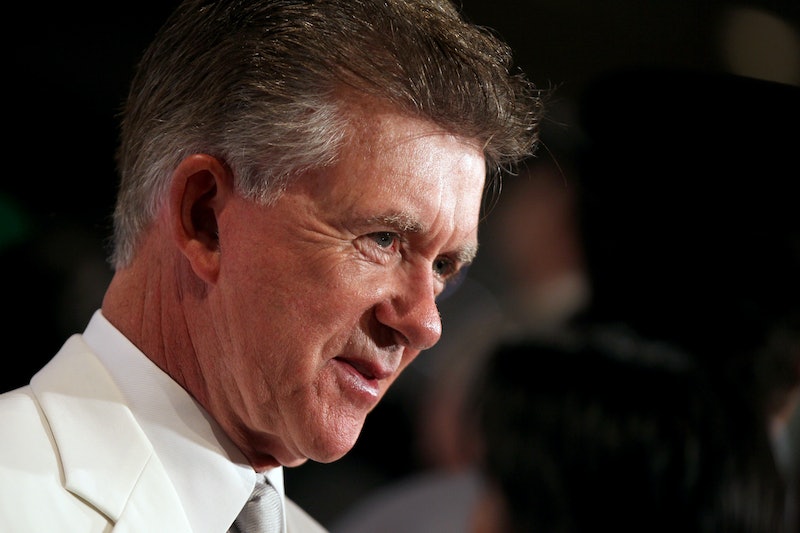 One of TV's favorite Dads and game show hosts, Alan Thicke, reportedly died of a heart attack while playing hockey with his teenage son Carter, according to TMZ. His publicist has confirmed to The Hollywood Reporter that the 69-year-old was rushed to Providence St. Joseph's Medical Center around noon on Tuesday, Dec. 13, where he was pronounced dead. The Canadian actor was best known for his role as family patriarch Jason Seaver on Growing Pains and also recently appeared in Netflix's reboot, Fuller House. The actor also got into the music game, writing several television show theme songs including Diff'rent Strokes, Wheel of Fortune, and his own show, Growing Pains. He was the kind of guy who had talent in all sorts of areas but still kept a low profile — an admirable quality.

Thicke held court on ABC's Growing Pains for the seven seasons from September 1985 to April 1992. He played a psychiatrist who worked from home and dealt with the ultimate whackiness of his zany TV family. He performed alongside Joanna Kerns who played his wife and Kirk Cameron, Tracey Gold, Jeremy Miller, and Ashley Johnson who played the Seaver children. In the final season of the series, the family took in a homeless teen who was portrayed by Leonardo DiCaprio.

Thicke is survived by his three sons, singer and songwriter Robin Thicke ("Blurred Lines"), Brennan Thicke who are children of his first wife, Gloria Loring. He is also survived by the previous mentioned 19-year-old Carter, his son with his second wife, Miss World 1990 Gina Tolleson, as well as his current wife, Tanya.

Thicke is unfortunately an addition to the long list of celebrities who passed away in 2016. It's been a rough year. Our thoughts go out to Thicke's family and friends at this time.