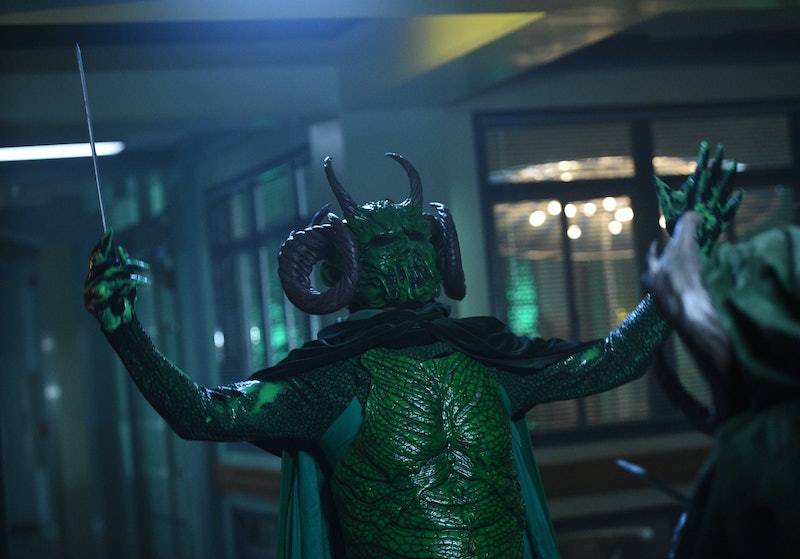 If you were absolutely thrilled to see Grace's dad return last week (albeit as a murderer), you have my condolences because Wes met a gruesome fate on Scream Queens in the Dec. 13 episode "Lovin the D." As we learned upon his surprise return, Wes had joined the Green Meanie team because he holds the Chanels directly responsible for Grace's mental breakdown. And, because this is Scream Queens, his logical conclusion was that they should pay with their lives. During a Green Meanie Summit, it became even more abundantly clear that this is the most poorly coordinated murder conspiracy ever — I mean, these people can't even keep track of who killed who.

I know some of them are new at this, but what's Hester's excuse? This girl should be a pro. Wes reveals during the chaotic summit that he killed Chad, so I won't apologize for not shedding any tears when he himself winds up dead at the end of "Lovin the D." Also, he killed himself and left his institutionalized daughter an orphan — so, not only is he responsible for the death of my favorite character, but he's also a pretty terrible parent. When it appeared that the other Green Meanies were about to turn on him, Wes threw himself into a frier (throwback Tuesday?) and I guess that's the end of the Gardner family's arc on Scream Queens.

But, wait — could there be more than three Green Meanies? The official Scream Queens Twitter account hints that either the other two will die or there's another masked villain roaming the halls of the C.U.R.E. Institute. I'm leaning towards the latter, and Wes' brief return seems like it was meant to be a red herring — I mean, I'm sorry that Grace is ill, but he didn't add much to the plot. In next week's finale, I predict that we'll learn Cascade and Nurse Hoffel are in #Cahoots with a third Green Meanie to take down the Chanels. It's bound to be quite the showdown.