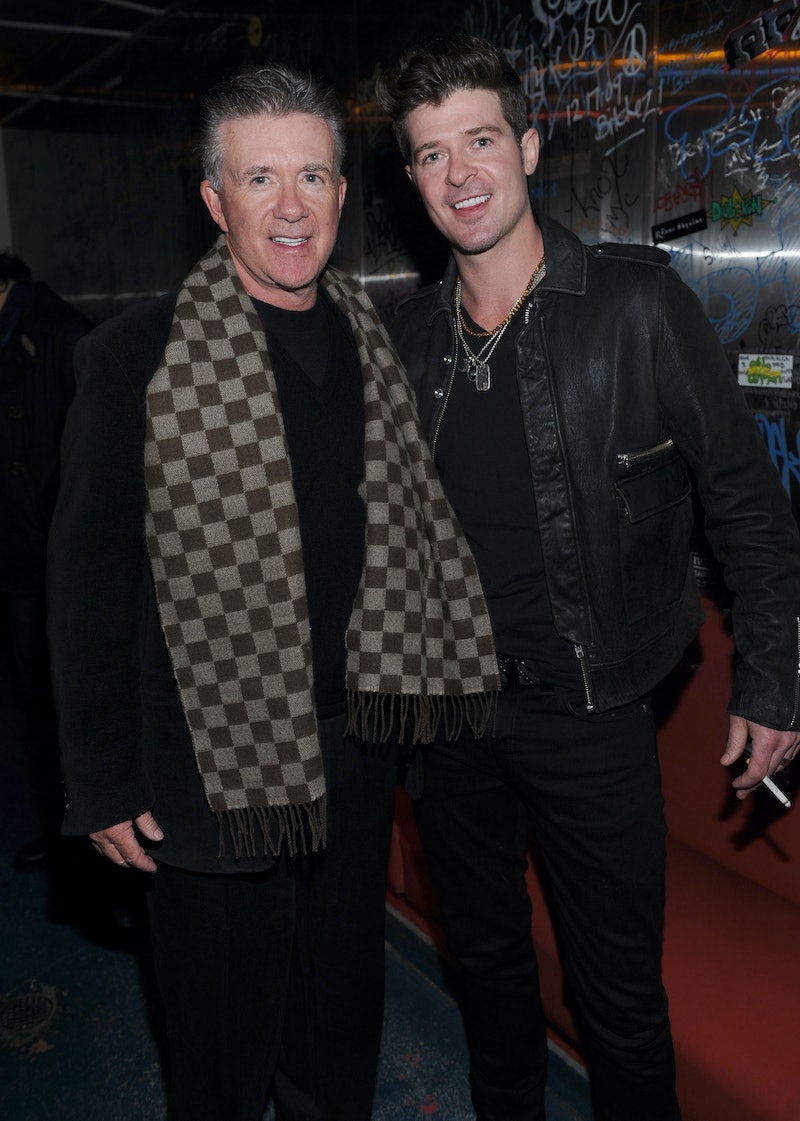 On Dec. 13, the entertainment world lost one of their most beloved TV dads when Growing Pains star Alan Thicke died at age 69 of a heart attack — and to add to the heartbreak, he was reportedly playing hockey with one of his sons when it happened. Thicke not only played one of America's favorite dads in the late 80's and early 90's, but was also father to three sons of his own, including singer Robin Thicke of "Blurred Lines" and "Lost Without U" fame. This touching moment between Alan and Robin Thicke on Growing Pains shows how great a dad he was on and off-camera.

In 1991, the elder and younger Thickes appeared together in an interview with "Entertainment Tonight" about Robin's dreams of a music career. Alan clearly supported his son, and even helped him write the song that he later performed on Growing Pains. The adorably smug Robin, who was a young teen at the time, performed on the show with two other bandmates. Their "music video" took place in a junkyard on top of a graffitied car. In the interview, Alan said he was able to help Robin with the "mushy stuff," but that he left the dance and rap music to his son.

Although there were some, er, growing pains when it came to his dad's support of his career choice, Alan eventually came around to embrace his son's career. Last year, he even revealed a little too much of his support when he told Us Weekly that he and his wife Tanya Callau got it on to Robin's song "Sex Therapy". Robin then jokingly tweeted at his father telling him he needed to "immediately" give him back his music.

Along with Robin, Alan was survived by his aforementioned wife and his other two sons -- Robin's older brother Brennan, who was a voice actor in the 80's and now runs a marijuana dispensary in California and younger half-brother Carter, who was playing hockey with Alan when he had his heart attack. Alan also had two grandsons from his oldest kids: Tyler, who is Brennan's child, and Julian Fuego, Robin and ex-wife Paula Patton's son.

As America says goodbye to their (Canadian) TV dad, Thicke will be mourned by his whole family. All of his sons followed in his footsteps in one way or another, and his legacy as Dr. Jason Seaver lives on through them.

More like this
Megan Thee Stallion Actually Auditioned To Be This 'P-Valley' Main Character
By Radhika Menon
An Ultimate Guide To The Music Of 'Rap Sh!t'
By Brad Witter
How Lady Gaga & Adele Are Closer To The EGOT All Of A Sudden
By Jake Viswanath
What Is Ben Affleck's Net Worth? At 50, The Oscar Winner Makes 8 Figures Per Film
By Meg Walters
Get Even More From Bustle — Sign Up For The Newsletter