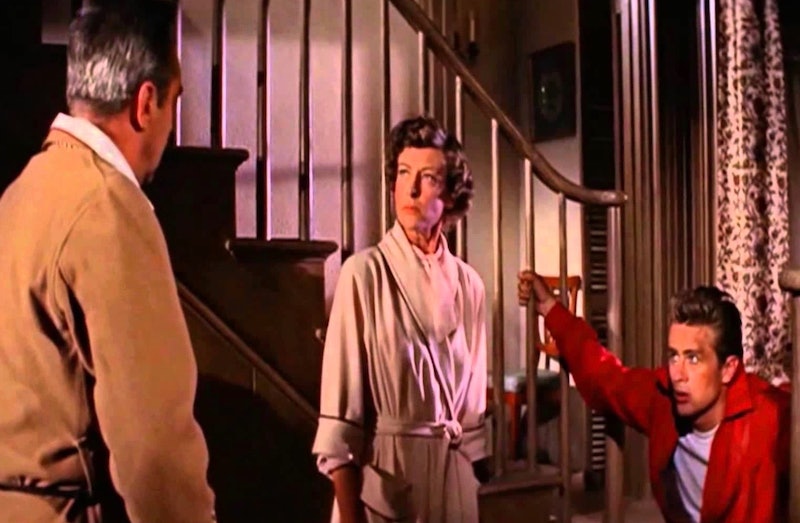 Surely one of the things we escape when we're adults and living on our own is the need to handle fighting parents, right? Wrong. Parental conflict, as it's called, can remain a specter in the lives of adult children long after they graduate and have families of their own, particularly around the holidays, when it's impossible to escape yet another parental fight about the best way to cook the stuffing or why the lights aren't up yet. Fortunately, if your parents are prone to regular whirlwinds of aggravating or distressing conflict that involves you whether you like it or not, there are certain psychological means whereby you can stay sane, reduce the damage, and make life easier.

We know certain things about family conflict from psychological studies. One is that they seem to get worse as people age, rather than resolving over decades as participants might "mellow" into adulthood; but the biggest aggravation, according to a major study from the University of Michigan in 2009, was between adult kids and parents, not between parents with children trying to intervene. That's another issue altogether, but it means that the amount of work done on adults weighing in on their parents' ferocious tiffs is a bit sparse.

From what there is, though, we can glean a few good ideas about how to cope with nuclear parents (in the explosion sense) this holiday season, and year-round.

Understand That It Is Not Your Responsibility To Fix Things

Fundamentally, your parents are adults having an adult problem in their relationship, and even if the drama is centered on you, it’s not actually your responsibility to sort out. This is particularly tricky in situations where you’re also an adult, because it’s tempting to see yourself as “the only sane adult in the situation” and wade in to solve things, or for them to use you as a mediator, supporter, audience, or weapon.

However, even though you might be an adult, they remain your parents, and as such you cannot and should not become involved as a third party to “sort it out,” unless under extreme circumstances. Also, it's most likely ultimately not under your control, and perceptions about the fact that it is might affect your relationship with your parents and your own ability to renege responsibility for the actions of others.

The sole area in which you may have responsibility is if one of your parents is abusing the other; and even then, you're not on your own to do something about it. Call support lines, the police, and family or friends who may be able to assist. The anti-domestic violence organization Love Is Respect recommends that, if a parent is being abused, you should offer them support, help them create a safety plan about your future, and take care of yourself as much as possible.

Recognize How This Might Have Affected You As A Kid

Studies about battling parents and their effects on children have been percolating for years. The impact of parental conflict on adult children, however, is a bit less known. If your parents have been fighting for years and did it regularly growing up, though, we do know that it likely had some kind of knock-on impact on your personality, ability to handle aggression, relationships, and academic achievement.

Kids with inter-parental fighting have been shown, for example, to have lower "academic attainment" (read: lower grades), more aggression, and lower self-esteem; the effect was particularly heightened if the kids had "self-blaming behavior," where they thought the reason for the fighting was down to them and tried to fix it themselves. It's also not far-fetched that observing the conflict styles of your parents has trickled down into your own conflict approaches with partners and friends: If they storm off in huffs, do you do so too? If they're likely to pick up on small habits or nag, do you consciously avoid that behavior?

Try To Bond With Siblings (If You Have Them)

A study from 1999 reveals that often, parental conflict has the result of making relationships between siblings difficult: In the words of the study, "marital conflict was associated with problematic sibling and peer relationships." Be aware of that as you proceed. Siblings often have different "roles" when it comes to the warring parents at the center of the family dynamic: the rebellious one, the mediating one, the ignoring one, the one who escalates, the one who smooths things over or pretends stuff is OK.

If you're going to deal with fighting parents, recognizing that you and your adult siblings are in this together, and having a conversation (or attempting to have one) about how you're dealing with it, is a good plan. If they don't want to, that's their right. But don't let fighting parents try to pit you against one another, either. Always remember that it's their issue, not your or your siblings', and you are not metaphors or proxies for their deal. If you're an only child, well, then, my sympathies that you're alone in dealing with this.

Do Not Let Them Attempt To Burden Or Separate You

The problem with continuing parental conflict is that it can go on for years; an essay in The Guardian from 2013 came from a woman whose parents argue viciously well beyond retirement age and are consequently exhausting her. The result of such a long-entrenched dynamic is that it seems both inescapable and invasive; it's such a big part of the family story that you can't get away from it, and it's unlikely to change.

While they might be stuck, however, they do not need to pull you in with them, particularly into the parts of your life that otherwise do not involve them. It's perfectly reasonable to refuse to deal with feuding parents while you're at work or have other obligations to children, partners, or friends. Their conflict should not have the power to separate you from the things you love and use for support. If they insist on trying to use you, separate using a script: "You really should be telling this to Mom/Dad, or to a therapist; here are some numbers for you to use" is one suggested option.

Make Boundaries — And Stick To Them

This can be the hardest bit: maintaining a certain level of “nope” that, once crossed, means you retract from the conversation, room, or entire house, as the case may be. Just because they’re being idiots to one another does not give them the right to transgress what you want and need, particularly if you’ve made it clear several times. Everybody’s got their own limits — maybe you don’t want them to bicker while you’re around, or would rather they didn’t try to pull you in to mediate, or refuse to be the “cheerful” one who tries to make everybody happy during a blazing row, or are going to go for a long walk or turn off your phone if they start calling to complain about one another. Pick what it is, make it clear what the consequences are, and follow through; a boundary that’s not backed up is just a line they’ll feel free to cross without thinking about it.

Getting people to back up your boundaries can be helpful. A guide to handling divorcing parents as adult children recommends talking to all your siblings and perhaps preparing a written statement about what you're willing to help with, and the point at which you're going to step out. If a boundary really needs to be enforced (they need to go to therapy or stop doing something hurtful), stage an "intervention" where you calmly, quietly explain your needs and what will happen if they're not met. And always uphold your end of the bargain.

More like this
How To Change Your Twitter Handle
By Emma Carey
The Best Time To Date After A Breakup, According To Experts
By Bustle Editors
20 Things You Should Never Tolerate In A Relationship
By Rachel Sanoff and Kathleen Ferraro
12 Ways You're Sabotaging Your Love Life
By Teresa Newsome and Lexi Inks
Get Even More From Bustle — Sign Up For The Newsletter