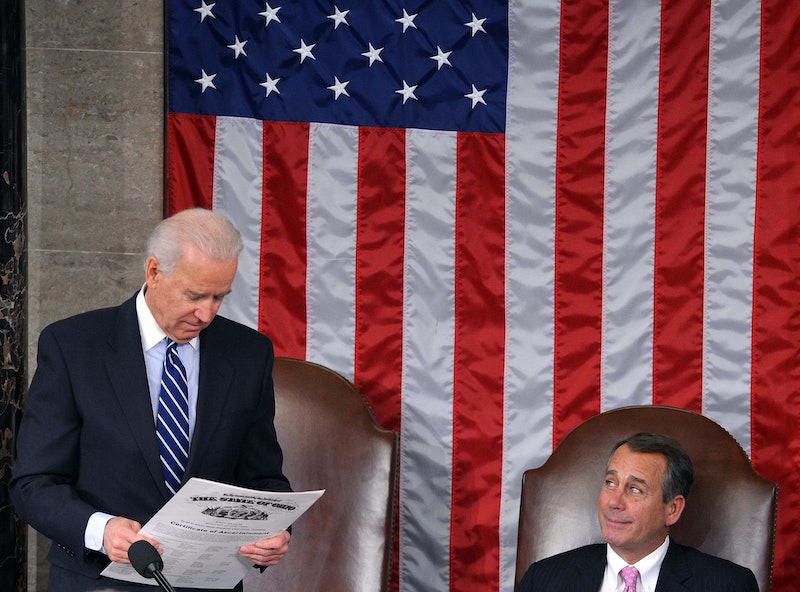 As we've seen following Hillary Clinton's historic popular vote totals (only President Obama's in 2008 beats hers), the system to elect the United States president is quite complex. The candidate who gets the most number of votes, for example, does not necessarily become the president. Trump of all presidents in our history, will have lost the popular vote by the biggest margin ever, some 2.8 million. That may seem outrageous — and perhaps it is — but the reason harks back to our Constitution and the Electoral College, with results announced on Jan. 6. Why that day?

As this is a complicated process, there's a very clear timeline for everything that must happen. First the state elections must have been certified and electors chosen by Dec. 13. There's no penalty for missing this, but the idea is that it keeps things clear and certain for the final vote count. Then on Dec. 19, the electors meet at their respective state capitols to cast their votes. The state then prepares paperwork that certifies the whole process and sends it off to Washington, D.C. They must be received by Dec. 28. They are then read on Jan. 6, as is laid out in U.S. code.

There's a section on "Reading electoral votes in Congress," provision 15 of Chapter 1 of Title 3, United States Code. It states:

From there the code goes on about the formalities about how the votes are to be read. But if you're curious about why the votes are read on Jan. 6, it's all right here. Given that U.S. code is a law, these date could always be changed by Congress. It was not laid out in the Constitution; that provided the larger framework but wasn't specific on the details like this one. Earlier would have been difficult with the Christmas and New Year's holidays, and the new Congress doesn't meet until Jan. 3 according to the Constitution.

One reason for having it at least that early and not later in January is Inauguration Day. The 20th Amendment makes it very clear that the "terms of the President and Vice President shall end at noon on the 20th day of January." If the Electoral College process hasn't finished by then, it could be quite a mess — even more so than the Trump transition team. So stay tuned to Jan. 6 to see how many faithless electors there were in the end.

More like this
The 8 Best Chew Bones For Puppies, According To A Vet
By Andrea Hannah
Scotland's First Period Dignity Officer Is... A Man?
By Darshita Goyal
A Political Thriller Inspired By The Munich Massacre Is Coming Soon
By Darshita Goyal
Why Eurovision 2023's Host City Won’t Be Revealed For A While Yet
By Sam Ramsden and Rachel Mantock
Get Even More From Bustle — Sign Up For The Newsletter