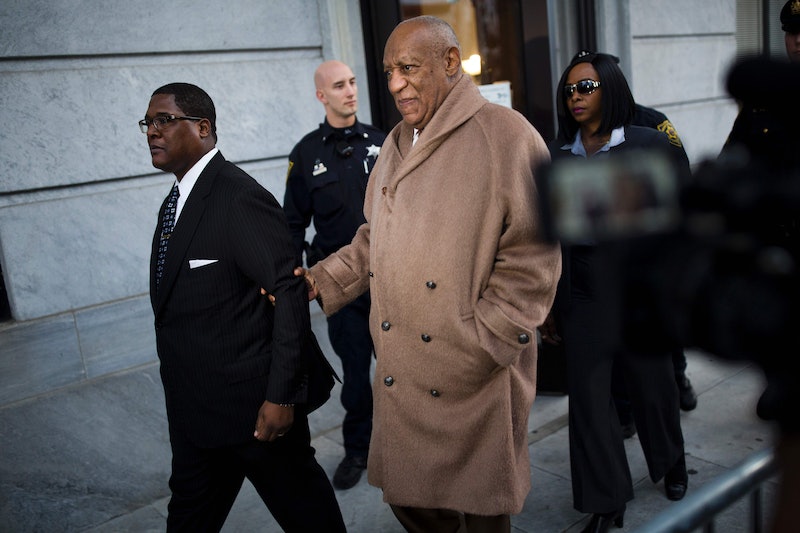 The trial is still about six months away, but there was already a shouting match at the Bill Cosby hearing early this week. The hearing, which is happening well in advance of the trial itself, is being held in order to determine whether 13 women accusing Cosby of sexual assault should be able to testify at his trial. Cosby is being charged with three counts of aggravated indecent assault, which allegedly took place in 2004 and which he denies. Things are already heated, which is no surprise for what could very well be "one of the most prominent sexual assault trials in a generation."

Whether or not the women who have come out against Cosby will be allowed to testify is a question that will in large part determine how the case progresses, and that's probably a large part of why the atmosphere in the room was so tense. The lawyers shouted at each other twice in the courtroom, both times over questions of what qualified as permissible evidence.

The District Attorney, Kevin Steele, got heated the first time because the defense tried to use material that revealed the name of a woman who came forward — but not all of them have made their names public. After his outburst, the judge ordered the defense not to disclose the women's names and warned the lawyers about their behavior. Steele's second eruption on a similar issue drew a response in kind from Cosby's lawyer, Brian McMonagle, and then the judge warned them that he could bring the sheriff in if they didn't stop.

The plaintiff in the key case is Andrea Constand, who claims that Cosby sexually assaulted her after drugging her, which Cosby denies. The women wishing to testify at the trial all claim that Cosby allegedly assaulted them in a similar manner — by drugging them, they claim, and then assaulting them once they were incapacitated — which are charges that Cosby's lawyer has indicated the former Cosby Show star will fight to the end. The prosecution team chose those women in particular because their stories most closely matched that of the plaintiff, and prosecutors hope that that will allow them to use the testimony under the Prior Bad Acts clause.

Cosby, for his part, maintains that the sexual encounter with Constand was consensual.

This particular hearing has become tense because a large part of the prosecution's case hangs on the testimony of these additional women. There is a precedent for conviction in rape cases based on a pattern of similar acts in the past, and the prosecutors hope that the judge will allow these women to come forward as witnesses. Their cases are not up for trial, though, so the legal backing is fuzzy. The defense claims that witnesses like these who are not expressly related to the case could unfairly prejudice the jury against the defendant.

The hearing is the latest step in a process that has already become quite drawn out and that will likely continue to gain a lot of publicity. Crosby's lawyers spent months trying to get the judge to throw out the charges, but their efforts failed. Prior testimony that Cosby gave admitting that he had given women drugs before having sex with them, which the judge decided to allow at the trial, is only one of the potentially damning pieces of evidence that the prosecution has to work with.