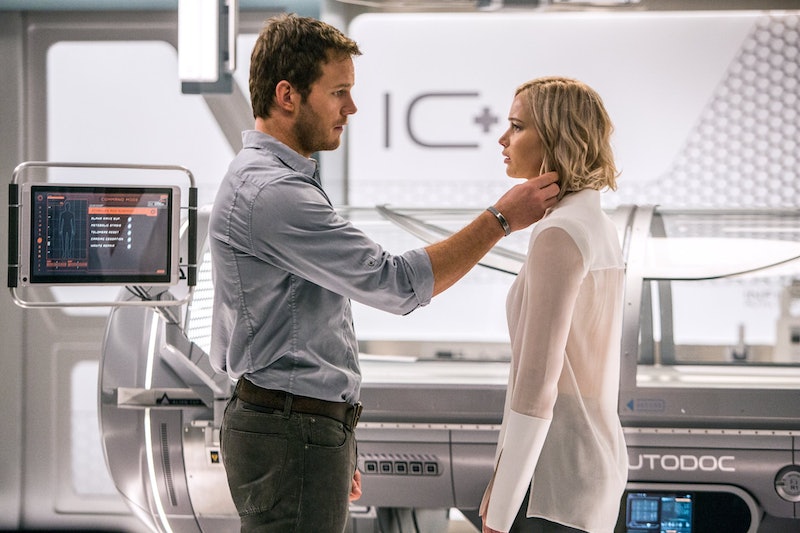 What's better than Jennifer Lawrence and Chris Pratt headlining a love story? Jennifer Lawrence and Chris Pratt headlining a love story set in space. Passengers premieres on Dec. 21 and casts the aforementioned superstars as two strangers who find themselves in a rather unprecendented situation. Aurora and Jim are just two of the many humans who have booked passage for themselves on a ship that leaves Earth heading for another inhabitable planet. The journey is a long one, so the passengers are put into artificial hibernation for the journey. Due to some hiccup, Jim and Aurora end up awake, alone, and with years left until they'll reach their new home. The plot sounds like something straight out of a science fiction novel, but Passengers is not based on any book.

The original screenplay for Passengers was written by Jon Spaihts. It was selected for the 2007 edition of the Black List, that oft-referenced catalog of screenplays that are unproduced but still appreciated in the industry. Though it took nearly a decade to get that script produced and into theaters, Spaihts was able to leverage the positive response to it into other work. Prometheus and Doctor Strange are both on his resume, and coming up next are two more anticipated sci-fi flicks: The Mummy reboot and the new Van Helsing.

According to Variety, the rights for Passengers were bought first by The Weinstein Company. After that studio gave it up, it was in the hands of Focus Features. If one of those previous deals hadn't fallen through, Keanu Reeves would apparently have been playing Jim. And either Reese Witherspoon or Rachel McAdams would have been given Lawrence's part.

In a 2012 interview with Filmmaker Magazine, Spaihts talked about how science fiction movies from pre-SPX ones like The Day The Earth Stood Still to the Terminator films are still what stoke his creativity as a screenwriter. The idea for Passengers began to gestate after he met with Keanu Reeves, who had found a different idea that the writer had pitched him intriguing but "too dark." "I had never asked it of myself but it was one of those moments where a story seemed to leap from my head fully formed and one idea seemed to lead to the next with a beautiful necessity," he said. "In about half an hour I riffed the spine of the story that became Passengers." At the time the interview was conducted, Reeves was still attached to the project.

Passengers has been in some level of development off-and-on for years, and Spaihts told JoBlo.com that it's "incredibly gratifying" to see the film finally released to audiences. And though the script did undergo some changes over the years, Spaights feels lucky to have been in control it all the while. "To finally get it made, and to see it in such style, and to be on set and be deeply involved in the production has been the ride of a lifetime," the screenwriter said. "And honestly, to have the project to myself like this is extraordinarily rare and could easily never happen to me again, even in a long and successful career."

Passengers is an original story, but that story is written by someone with respect for the tradition of great and thought-provoking science fiction in film.

More like this
Read The First Pages Of Emma Rosenblum’s Highly Anticipated Debut, 'Bad Summer People'
By Samantha Leach
What Joyce Carol Oates Knows About Fame
By Erin Somers
Is 'The Woman King' Based On A True Story? The Female Agojie Warriors Did Exist
By Radhika Menon
10 Must-Read New Books Out This Week
By K.W. Colyard
Get Even More From Bustle — Sign Up For The Newsletter