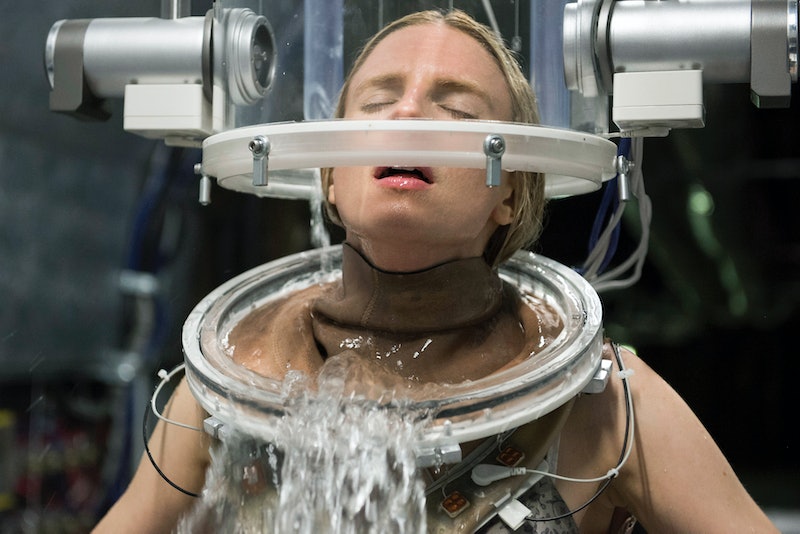 Cancel your plans for the weekend, because something much more important than socializing has come up. Surprise! Netflix is dropping a brand new science fiction series called The OA this Friday, with very little notice. The trailer for the series just popped up on Monday, and the official Netflix Twitter has been promoting the show with vague, chilling messages. The OA seems like the kind of show that will benefit from audiences knowing very little about it going in. And the information is scarce anyway. What's known is that the series comes from showrunners Brit Marling and Zal Batmanglij, who collaborated on the 2013 crime drama The East. And The OA stars Marling as a young woman named Prairie Johnson. Blind when she went missing seven years previous, Prairie reappears after a stint in a mysterious facility, now able to see. As is the Netflix way, the entire first season of the show will be available at once. That could mean an announcement about a second season of The OA might not be far off.

Stranger Things is a natural comparison to make here. The first season of that Netflix hit arrived on the service on July 15. Plans for a second season were confirmed by Aug. 31. Netflix has not announced intentions to produce The OA Season 2 yet. But I assume that if this new show is as popular straight off the bat as the Duffer Brothers' addictive and nostalgic series, Netflix will want to shore up a follow-up season straight away. Of course, there's a chance that The OA might be intended to stand alone as an event series. But that's less likely than the serial approach.

Without much to go on, I still feel like The OA has the makings of a streaming hit. Here's why I think this show will quickly find a fan base and secure a Season 2:

It's A Sci-Fi Series With A Female Protagonist

It arrives on Netflix six month after Stranger Things, but to me, The OA looks like it may have more in common with BBC America's feminist sci-fi drama Orphan Black. Either way, the genre can be a breeding ground for incredible parts for women. Prairie could be one of those iconic characters.

The Cryptic Marketing Has People Talking

Remember when Beyonce dropped a surprise album in the middle of the night and the world fell off its axis? Netflix's quick rollout of The OA isn't quite the same, but it does have people talking.

At Eight Episodes, It's An Easy Marathon

It's doable in one day, even. And if you spread them out over an entire weekend, eight episodes is bush league marathoning. Plus, the threat of spoilers will be very motivating.

The OA trailer hints that the show has the stunning cinematography and meticulous production design of a prestige show. Will it look as good over eight hours as it does over 90 seconds? You'll have to watch it to find out.

People are curious for sure, but The OA needs to prove its value to Netflix before it gets a second season.