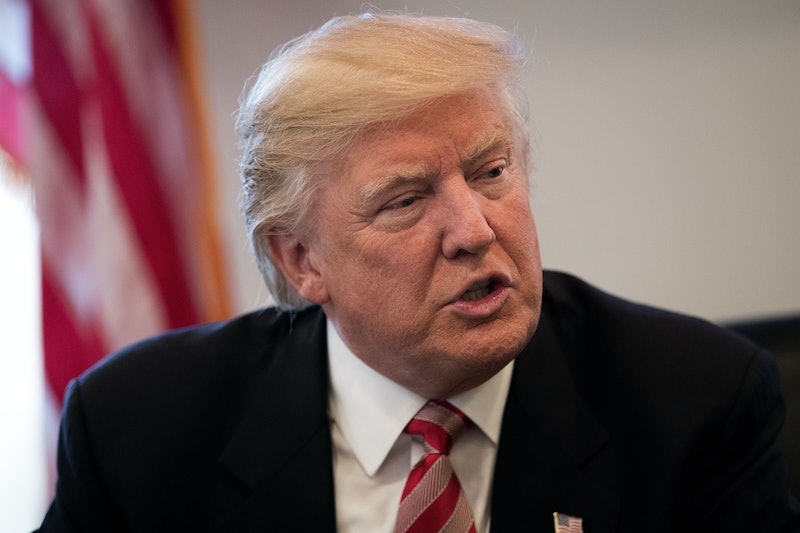 President-elect Donald Trump technically still has one more hurdle to cross before he marches into Pennsylvania Avenue this January. The Electoral College hasn't voted yet, and it's the electors' votes — not the popular vote — that decides who will become President of the United States. With a normal candidate, this would not be up for discussion; he would have more than the 270 electoral votes required and cruise to victory when the votes are read on Jan. 6. But Trump is not a normal candidate, and there have been Electoral College vote count predictions that point to a different outcome. They're far fetched but worth discussing.

Trump won 306 electoral votes based on his state wins. In nearly every state, whichever presidential candidate wins the most popular votes, gets all the electoral votes. The two exceptions are in Nebraska and Maine, where congressional districts play a role — but this year they didn't split their votes. So that would mean Trump will get 306 votes, and Clinton would get the remaining 232. But as I mentioned earlier, this is not a normal election year. One Texas elector has already said in a New York Times op-ed that he will not be voting for Trump.

The question, then, is how many people will join him in voting for someone else — be it Hillary Clinton, or more likely another Republican. In the opinion piece, the to-be faithless elector, Chris Suprun, pointed to Ohio Gov. John Kasich, but since it ran, Kasich has asked that the Electoral College not vote for him. But that would only put Trump at 305 and Clinton potentially as low as 224, as eight Democratic electors have promised to defect if they can convince Republicans to go for someone else. So a 305 to 224 to 9 split is a safe prediction, and Trump would still be elected.

The question to ask then is if this is a fair estimate of Trump defections. Publicly just one elector has committed to doing so, but there are reports of many more. One Harvard law professor, Larry Lessig, has said as many as 20 GOP electors are ready to vote for someone else. That's more than half of the required 37 that would deny Trump the majority, 270 electoral votes, to become president.

And as that becomes known, it could lead to more, Lessig explained to POLITICO. "Obviously, whether an elector ultimately votes his or her conscience will depend in part upon whether there are enough doing the same. We now believe there are more than half the number needed to change the result seriously considering making that vote." That would lead to some of the more extreme predictions, such as the one put forward by Michael Moore last week.

He told Seth Meyers on Late Night that something crazy could happen — much like Trump's initial win. He went on to all but predict an Electoral College upset: "He's not president of the United States yet. He's not president till noon on Jan. 20 of 2017. That's more than six weeks away. Would you not agree regardless of which side of the political fence you're on, this has been the craziest election year? Nothing anyone predicted has happened; the opposite has happened. So is it possible, just possible, that in these next six weeks, something else might happen — something crazy, something we're not expecting?"

The GOP insists that's not the case, but they're spending a lot of resources to stay in touch with all of the electors to ensure there are no last-minute surprises. Supposedly this is standard practice, but as Moore said, they would really like to ensure that things go as predictably as possible. As things stands, Trump will almost certainly be president, taking home between 286 and 305 electoral votes.

But as we've seen, anything can happen in American presidential politics.