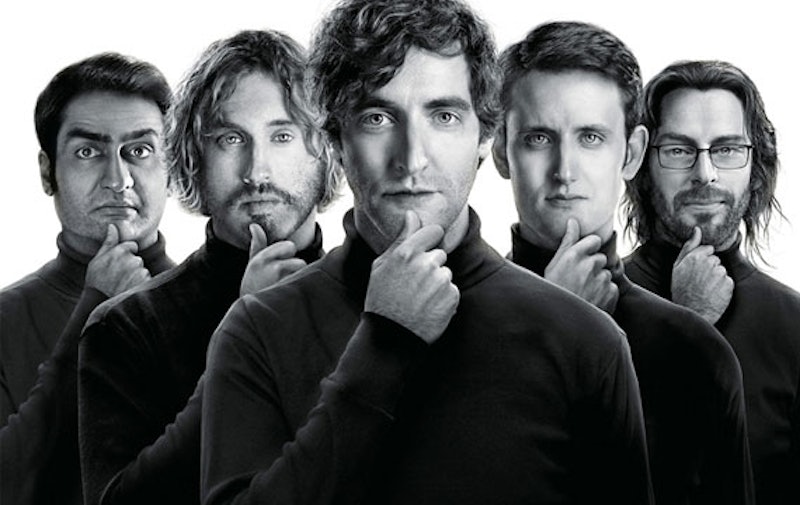 If you've seen the tongue-in-cheek take on Walter Isaacson's Steve Jobs book (or rather, the thumb-on-chin take) of the poster for Mike Judge's uproarious new HBO comedy series about the dot com start-ups called Silicon Valley, then you've probably spent a good amount of time staring at it. "I know I know that guy from somewhere," you've probably said to yourself, about five times over. While Silicon Valley could easily propel its cast — which includes Martin Starr, Zach Woods, Kumail Nanjiani, T.J. Miller, Thomas Middleditch and Josh Brener, among others — to household name status (it's just that funny), we're here to help you put names (and previous projects) to a few faces. Silicon Valley premieres on Sunday, April 6 at 10 PM on HBO, and here's what — and who — you need to know.

Who He Plays on Silicon Valley: The arrogant, but gifted Gilfoyle.

Where You've Seen Him Before: Starr is arguably the most recognizable of the bunch, and that's thanks largely to him being one of the main players of the Judd Apatow Fame Factory. Starr played lovable geek Bill Haverchuck on the tragically short, but beloved series Freaks and Geeks. Since then Starr has appeared in other Apatow-related projects like Knocked Up (as the friend who grew the gnarly beard after losing a bet) and Superbad (in which he played a suspicious partygoer). And while Starr has plenty of memorable big screen credits to his name (including Adventureland, Paper Heart, and This Is The End, in which he played himself), it's his small screen work that made us all take note. Aside from his star-making turn on Freaks and Geeks (where he could not only be hilarious, but heartbreaking, like in the episode "Dead Dogs and Gym Teachers"), Starr was a main player in another short-lived cult series Party Down. Starr played a struggling, smart-ass sci-fi writer Roman DeBeers who got by working (quite unhappily) as a cater waiter.

Who He Plays on Silicon Valley: Jared, an executive with some ulterior motives.

Where You've Seen Him Before: Nobody plays annoying whipping boy better than Zach Woods. Case in point: name one person who liked the dweeby nuisance that was his character Gabe Lewis on The Office. (The answer, in case you were wondering, is "no one.") Woods has played snarky dorks on both the big screen (In the Loop, The Heat) and the small screen (while he doesn't get quite the shellacking Jonah does, his character Ed on Veep still gets some vitriol as much as he slings it). Who knew a guy with such a sincere face could make us all so uncomfortable?

Who He Plays on Silicon Valley: Dinesh, a code writer with a dry wit. Gilfoyle's foe.

Where You've Seen Him Before: Uh, everywhere. The character actor and stand-up comedian has been on the small screen in both recurring roles (as Pindar on Franklin & Bash, as Zakir on Burning Love, and as the voice of Prismo on Adventure Time) and one-offs (Community, Veep, Drunk History), as well as his own Comedy Central stand-up special. He can also be seen in bit parts on the big screen (Life As We Know It, The Kings of Summer, The Five-Year Engagement). But Nanjiani's most memorable work, thus far on screen (plenty of people know him from his popular podcast "The Indoor Kids") has been his various characters and adventures on Portlandia.

Who He Plays on Silicon Valley: Richard, the perpetually stressed-out inventor who built his own start-up and finds himself in the middle of a Silicon Valley battle.

Where You've Seen Him Before: Much like his co-star Kumail Nanjiani, Middleditch is just one of those faces you know you've seen in other things before. In fact, you've seen him on the small screen in things like Trophy Wife and The Office. (His longest-running TV gig to date was on the CollegeHumor Originals shorts.) If Middleditch looks especially familiar, that's because the actor, who has appeared in movies like The Campaign and Splinterheads, that's because he played a broker in The Wolf of Wall Street and a cop who dared to question Nick Offerman in The Kings of Summer.

Who He Plays on Silicon Valley: Erlich, a pothead and the administrator of the Hacker Hostel.

Where You've Seen Him Before: The goofy, curly-haired moppet is a writer and actor who you probably recognize from movies like She's Out of My League, Seeking a Friend for the End of the World and Cloverfield, as well as short-lived TV shows like Happy Endings and The Goodwin Games. Though, truth be told, you might recognize Miller's voice before anything else. His voice can be heard in How To Train Your Dragon as the character Tuffnut. Of course, you should recognize Miller for doing the impossible: stealing a scene from Paul Rudd like he did as his stoner, candle-making buddy in the underrated 2011 comedy Our Idiot Brother. Trust me:

Who He Plays on Silicon Valley: Richard's best friend Big Head, who lives and works at the Hacker Hostel.

Where You've Seen Him Before: Even though Brener didn't make the Silicon Valley poster (sorry, dude!) you've definitely seen him on House of Lies, Maron, Glory Daze, Workahlics, and as Dale on The Big Bang Theory. But if you saw last year's comedy The Internship, you more than likely remember him as Lyle in the comedy opposite Vince Vaughn and Owen Wilson.