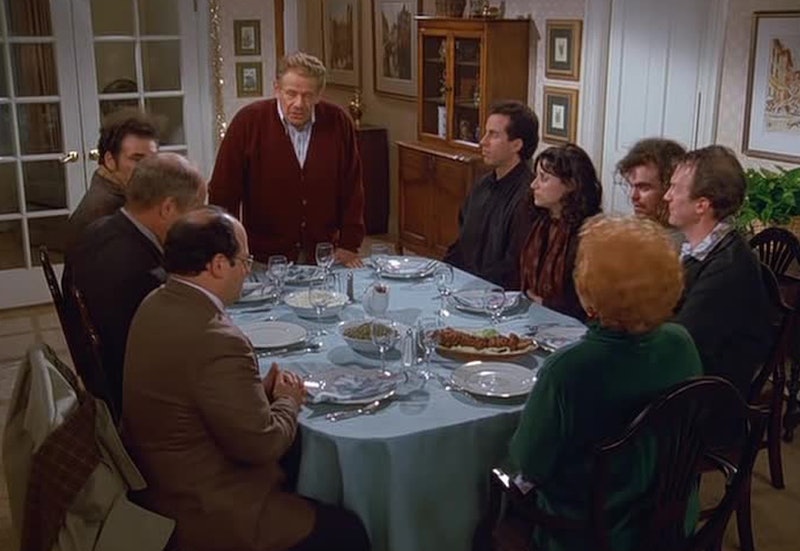 Does this Christmas season have you feeling pretty anti-holiday? If so, join the ranks of Seinfeld fans who will be celebrating Festivus this year to prepare for the actual holidays, and laugh your pants off with these funny Festivus Day memes. Kramer, George, Elaine, and Jerry know what I'm talking about — and if you don't, you will soon enough.

Never heard of Festivus? Well, that's because it technically doesn't exist IRL. It's a fictional holiday made up by Frank Costanza in the hit comedy television series, Seinfeld. Frank came up with the idea for the holiday when George was a child: It involved replacing the traditional Christmas tree with an aluminum pole (he found tinsel to be too distracting) and having an annual dinner that began with "The Airing of Grievances" (telling everyone at the table what you don't like about them) and ended with "Feats of Strength" (where someone had to pin him down in hand-to-hand combat). Sound like your type of holiday? Kramer thought so too.

Still wanting the full backstory of Festivus, check out this summary video. Festivus isn't for the weak of heart, but it is for those who have a great sense of humor and a strong desire to kick Christmas to the curb. Even if you don't partake in your own Festivus festivities, these memes are sure you have you rolling on the floor in a fit of laughter. Enjoy!

Festivus feels a little bit hipster, does it not?

It's not Festivus until the grievances have been aired.

At the very least, watch the clip.

Are we sure Jerry Seinfeld didn't live in Williamsburg?

Everybody got their aluminum pole?

It's not about the presents or the consumerism. It's about the people.

Kramer's got the right idea.

Every Seinfeld fan will appreciate this.

It ain't over until someone gets pinned.