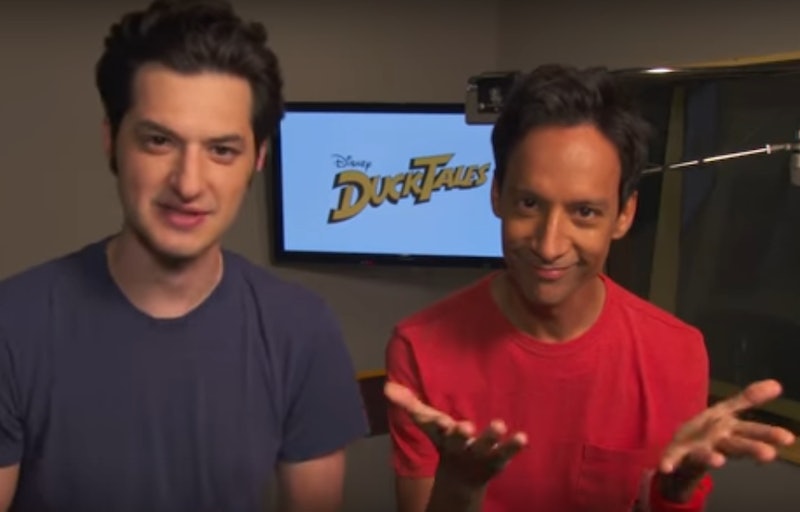 The holiday season means different things to different people, but for me, it's always meant indulging in some sweet, childhood nostalgia while enjoying endless parties which inevitably end in a karaoke dive bar somewhere. So, it filled me with great delight to discover that both of these things have merged in the most delightful and offbeat of manners: A video has been released of the DuckTales reboot cast singing the original theme song from the iconic '80s cartoon. And like Scrooge McDuck diving into a swimming pool of treasures, it's absolute gold, my friends. Aside from the obvious fact that the original DuckTales theme song is probably the single greatest song known to mankind (for real), the stirring performance is made all the more enchanting by just how great the actors starring in the DuckTales reboot are.

As well as Danny Pudi (Community), Ben Schwartz (Parks And Recreation), and Bobby Moynihan (Saturday Night Live) starring as Huey, Dewey and Louie, the DuckTales reboot also stars David Tenant as Scrooge McDuck. Because yes, life truly can be that great sometimes. As a result, it's an absolute delight to see these actors having just as fun a time singing the theme as fans are hearing them do so. For instant happiness, I highly recommend you watch the video below right this very second, because it's truly something special:

For those of you who happen to be (regrettable) karaoke enthusiasts just like I am, this rousing rendition of the DuckTales theme by the 2017 cast proves how karaoke should truly be done. Whether you're singing solo, as a duo, or in a group ensemble, as the video above clearly shows, all you need to ace a performance is a lot of spirit, a passion for your song choice, and the ability to have fun with your performance. Because, sure, Tenant isn't exactly nailing those high notes (bless that wonderful gem of a man) but he's also well aware of that fact and having too much fun to give a ducktale, dagnabbit.

But furthermore, watching the cast perform this theme song has also made me desperately wish for it to become a karaoke standard. It deserves to share the same hallowed space as the B52's "Love Shack" and Dolly Parton's "I Will Always Love You" as the sort of song you're guaranteed to hear performed at least once at every karaoke party ever. And damn, if it isn't just the most joyful song in the history of music, to boot.

I mean, seriously, can you think of any other song more fun than the DuckTales theme to get up and perform with your besties after sinking a few drinks? Because I actually can't. And by the time that the DuckTales reboot finally airs in 2017, I'm almost certain I would have enjoyed enough practice singing along to be fully prepared to completely slay that song at karaoke. And I can only hope I do it just as good as these guys, as and when that personal dream ever comes to fruition.

More like this
Kate Bush Revealed The Real Meaning Behind 'Running Up That Hill' Lyrics
By Darshita Goyal
Stormzy’s “Mel Made Me Do It” Is A Tribute To Black Talent & Success
By Catharina Cheung
What Does Nancy Jo Sales Think Of 'The Real Bling Ring'?
By Arya Roshanian
12 ’90s Movie References You Missed In 'Do Revenge'
By Radhika Menon
Get Even More From Bustle — Sign Up For The Newsletter