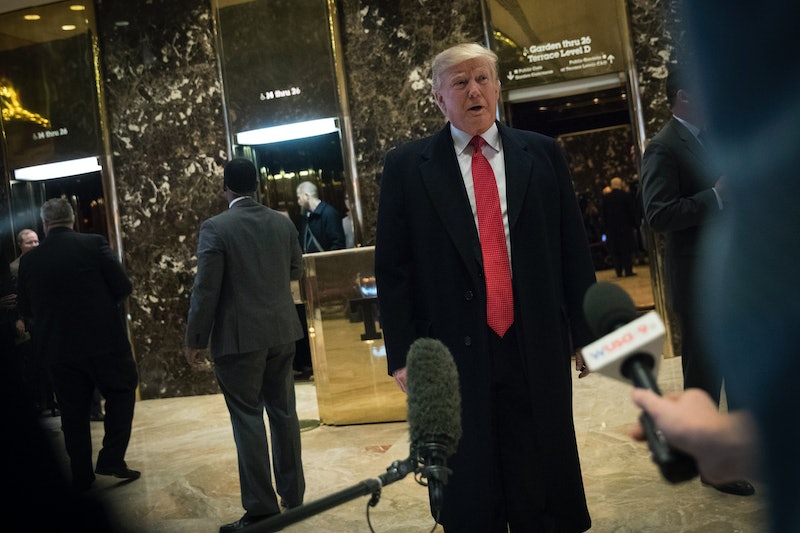 It has been 142 days since President-elect Donald Trump held a press conference, and the chances of him holding one before the year ends don't look good. Yet aside from representing a break with precedent, Trump's aversion to formal press conferences is also deeply concerning given his apparent opposition to press freedoms.

Although Trump hasn't held a press conference since July 27 — more than three months before he won the presidential election — he has done a handful of interviews with various news outlets. However, in sticking to prearranged interviews, Trump has managed to avoid the uncontrolled environment a press conference presents. Therefore, he's been strategically avoiding answering any difficult questions about his more controversial Cabinet appointments, policy proposals, alleged diplomatic gaffes, and potential conflicts of interest. Moreover, by tending to favor news outlets that are decidedly pro-Trump, the president-elect is able to skirt reporters challenging the baseless claims and accusations he so freely publishes on his Twitter account.

Trump is not truly accessible to the press and thus not accessible (nor accountable) to voters. Although he tweets often, the majority of Trump's interaction with reporters happens as he walks to and from the gold elevators in Trump Tower, or as he rails against them from behind the podium during rally stops on his national "Thank You" tour. This should be concerning to us because while Twitter may be a great platform for Trump to bring his message directly to voters, it's hardly an ideal environment for cultivating transparency or accountability. Already Trump has tweeted some unfounded claims — such as his claim he won the popular vote — with no attempt to supply evidence to support them. So you can see why I'm remiss to take him at his tweeted word.

Fox News contributor and Washington Examiner correspondent Byron York has suggested Trump's decision to scale back on press conferences might be due to his tendency "to get himself in trouble by ad-libbing." While Trump's off-the-cuff speaking style may have worked well for him on the campaign trail, it's certainly led to a few hiccups in front of reporters. For example, it was in his last formal press conference that Trump asked Russia to hack Hillary Clinton's email. Those comments have largely come back to hurt Trump in light of reports from U.S. intelligence agencies that Russian hacks interfered with the election.

A press conference Trump had scheduled for Dec. 15 to discuss how he planned to handle the potential conflicts of interest his business empire might pose to the presidency was canceled three days beforehand. In a statement to the Washington Post, a spokesperson for Trump's transition team reportedly said the president-elect needed to focus on filling out his Cabinet (though he still had time for victory rallies, meeting with Kanye West, and starting a Twitter feud with Vanity Fair).

Trump's unwillingness to hold a formal press conference also contrasts sharply with the heavy criticism he levied on Clinton during the election. "Crooked Hillary should be admonished for not having a press conference in 179 days," Trump tweeted June 1. Although Trump's transition team has said his Dec. 15 press conference would be rescheduled, no new date has been released and it seems likely America won't see a Trump press conference until January 2017 at the earliest — meaning Trump will continue to evade responsibility for his controversial appointments, policy proposals, and tweets.