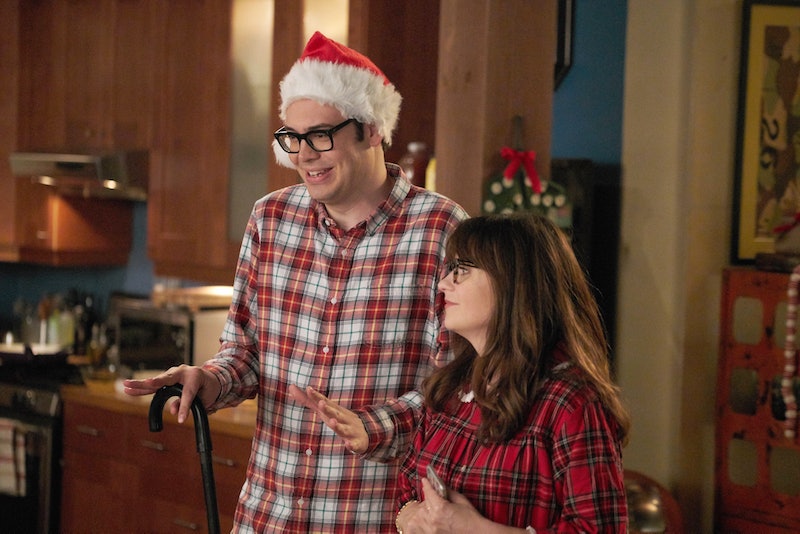 New Girl has added a member to the central gang. Robby, who we first met in Season 2 as Cece's boring boyfriend, has become a firmly recurring character in Season 6 thanks to his friendship and subsequent romance with Jess. Now, they are attempting to build their relationship though there have been some obstacles, like Robby's secretly dramatic life and Jess' anxiety about "taking it slow." Though they seemed to be in a more stable place after having an honest talk about where they stand in "Es Good" and celebrated "Christmas Eve Eve" together, the question of how long Robby will be on New Girl is still important, because it could give clues about Jess' future. After all, she was struggling with feelings for Nick not too long ago.

Well, we know that Robby and Jess' relationship will last for at least a few episodes, including after New Girl's short winter hiatus. Though FOX hasn't made any announcements about how long Robby, or the actor who plays him, Nelson Franklin, will be on the series, promo images for future episodes show he'll at least appear in "Cubicle," which airs on Jan. 10. That's actually the season's second episode back from break, so he could be just as big a part of the second half of Season 6 as he was of the first.

Even if Robby doesn't permanently join the cast, New Girl has always kept a revolving door of supporting characters that will pop up from time to time. So if he eventually disappears for a few weeks, there's always a chance he'll be back — after all, the show already decided to bring him back after almost three seasons. And now, he's far more worked into the group. There's a good chance that even if Robby and Jess can't make it work for more than another episode or two, he will occasionally appear every once in a while.

When Reagan reappeared in "Christmas Eve Eve," I was sure it would be the same tired revelation that's happened so many times now: Jess isn't OK with Nick dating, still harbors feelings for him, and in an instant, all of the character development from the last two seasons is gone — along with Robby. But, these exes are finally in a good place as friends again, and even a big misunderstanding between them didn't lead to any confessions about Jess or Nick being dissatisfied with their current relationships. And after Jess went through the whole "Satisfied Single" movement, it would be a little anticlimactic to see her immediately start pining after Nick again, and though I'm sure the Jess/Nick 'ship will sail again at some point, for now, their friendship and separate relationships are doing just fine.

In terms of logistics, Franklin is currently a recurring cast member on black-ish, so he probably won't be bumped up to a New Girl series regular this year — but that's OK. Right now, Robby's flexible, recurring role works perfectly, and for now, it seems that he's here to stay.