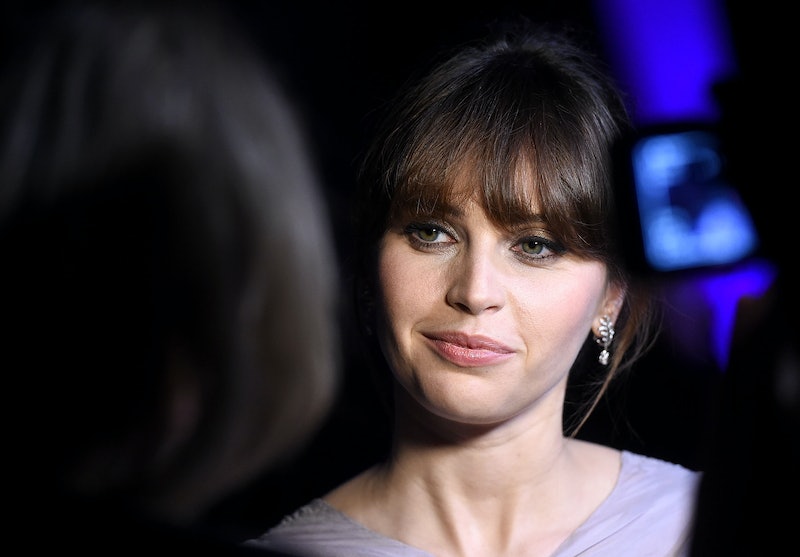 Oscar-nominated actor Felicity Jones has become known for her impressive dramatic performances in movies, from Like Crazy and The Theory of Everything the new Star Wars film Rogue One, currently in theaters. The English actor has shown her versatility over the years, so Jones hosting Saturday Night Live on Jan. 14 will be a real treat. Not only will the episode be the first of 2017, but the NBC comedy series will give the actor a chance to show off her funny side, which fans don't really get to see in her serious roles.

Jones will host the SNL episode alongside musical guest Sturgill Simpson, a country singer/songwriter, for the first episode of the new year before President-elect Donald Trump's inauguration takes place on Jan. 20, 2017. That means the actor could be in several political sketches — as the show is famous for its political satire — as well as maybe a Rogue One/Star Wars parody. As fans have come to learn about SNL, anything is possible — and super funny — when it comes to their hilarious sketches. And there's no doubt Jones will be a master at the comedic stage, even though fans have primarily seen her in dramatic roles.

The Brit actor has earned Oscar, Golden Globe, BAFTA, and Screen Actors Guild Award nominations for her performances in movies such as The Theory of Everything, The Invisible Woman, and Like Crazy. However, Jones has appeared in some comedic roles as well. In 1998, Jones made her TV debut in the UK children's series The Worst Witch and its follow-up series Weirdsister College in 2001. Jones guest-starred in a 2008 episode of Doctor Who called "The Unicorn and The Wasp," a lighthearted installment that includes a murder mystery and some Clue jokes. Check out a clip of the episode below, featuring Jones in the background.

In 2014, Jones appeared on the HBO comedy series Girls as Dottie, the estranged daughter of Jessa's boyfriend Jasper in Season 3. She more than holds her own in an intense dinner scene with Shoshanna (Zosia Mamet) and Jessa (Jemima Kirke).

While Jones has wowed audiences with her dramatic powress in her film roles, it'll be great to see her sense of humor shine on SNL next year.