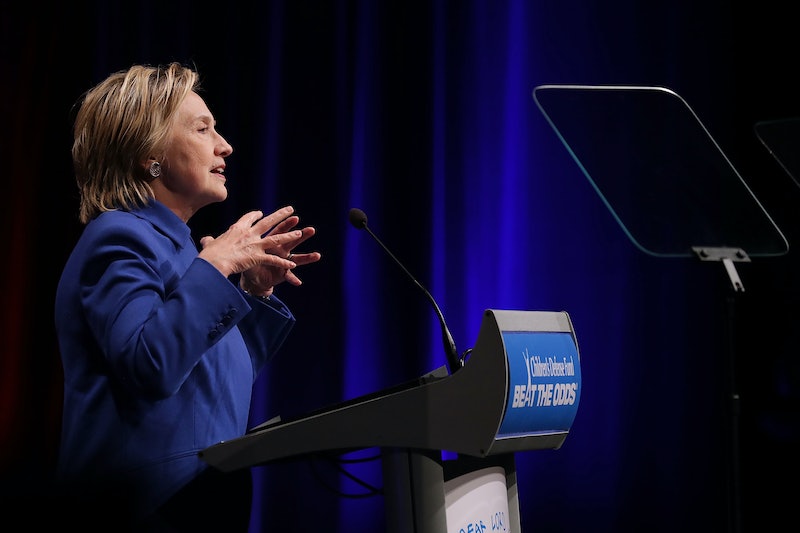 On Monday, the Electoral College will meet to vote for America's next president. Officially, Donald Trump is set to receive 306 electoral votes to Clinton's 232; however, a couple of faithless electors — electors who say they'll vote for somebody other than the candidate for whom their state voted on election day — have thrown this tally into question. We'll get the final Electoral College map update on Dec. 19, but until then, we can make a few guesses as to what the map will look like once the electors vote.

On the Republican side, only one elector has publicly pledged to become faithless: Christopher Suprun of Texas, who wrote a an op-ed in The New York Times explaining why he won't be voting Trump. Assuming he follows through on this pledge, we can subtract one electoral vote from Trump's total: Trump will receive only 37 electoral votes from Texas, rather than 38.

However, Suprun also says he won't be voting for Clinton, which means she won't get an additional electoral vote out of Suprun's defection. Suprun says he will cast his ballot for a "Republican alternative," and has hinted that he favors John Kasich. So, it's possible that Kasich will presumably receive one electoral vote out of Texas.

Constitutional law professor Lawrence Lessig, who has been engaged in the anti-Trump effort, claims there are 20 Republican electors who might become faithless on Monday; he hasn't said whether or not this number includes Suprun. However, Lessig didn't name any names, and no Republican electors have come forward to confirm his claim. If Lessig is correct, Trump could receive as many as 21 fewer electoral votes than he otherwise would; however, Lessig's claims should be viewed with a strong dose of skepticism, as nobody has confirmed them.

That's it for the GOP. On the Democratic side, things are even hazier: A handful of Democratic electors have said that they plan to be faithless, but they may be hamstrung by state laws penalizing faithless electors.

This is what's happening in Colorado, where three Democratic electors sued the state for the right to vote for whomever they please on election day. But a judge ruled against them on Tuesday, ordering them to cast their ballots for Clinton. The electors have filed an appeal, but that appeal may not be heard, and even if it is, it may be rejected. A similar situation played out in Washington, where two Democratic electors unsuccessfully sued to exempt themselves from state laws that penalize faithless electors. A lone Democratic elector also filed suit against his state of California.

What's unclear is how these Democrats will vote given that their lawsuits were all rejected. They could stick to their will, become faithless, and accept whatever penalty their states apply to faithless electors. Or, they could back down because their lawsuits failed. We simply don't know.

That said, POLITICO reported earlier in December that a total of eight Democrats claimed that nine Democratic electors have expressed their intent to become faithless. This means that conceivably, Clinton could lose at least nine electoral votes on Monday. As with Suprun, these electors haven't officially confirmed who they'll vote for instead, so it's impossible to say who would pick up these votes.

The picture that emerges is very fuzzy and uncertain. Judging by electors' public statements, as well as reporting on their intent, Trump will get between 285 (if every one of Lessig's 20 electors defects) and 305 electors (if only Suprun defects), while Clinton will receive between 223 (if every Democrat who's threatened to defect does) and 232 electors (if none of them do). And some other person will receive at least one electoral vote from Suprun, although we don't know for sure who that will be.

We'll have to wait until the electors vote to know how all of these uncertainties will play out. But because Trump almost certainly won't receive fewer than 270 electoral votes, a lot of these defections will be moot points. Barring anything truly out of left field, Trump will win enough electoral votes on Monday to become America's 45th president.