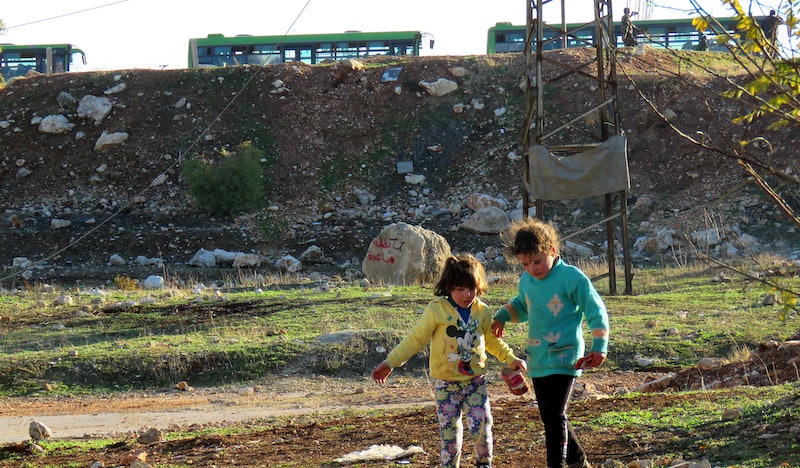 Many of the thousands of people stuck in the besieged city of Aleppo, Syria, are children, who are currently enduring incredibly harsh and dangerous conditions with very limited access to any type of basic needs. Children are especially vulnerable in these conditions, especially if they become separated from their parents. As families and children in Aleppo evacuate or await evacuation, there are several ways in which you can contribute to helping the children of Aleppo.

While some children have already been evacuated from Aleppo, thousands more remain trapped in the eastern part of the city, including many orphans. There are numerous ways to help these children both pre and post-evacuation through donating, advocating, and sponsorship.

Donating to Syrian aid organizations particularly focused on children is one of the quickest and direct ways you can help the children of Aleppo. Save the Children is among the most prominent aid organizations that are directly focusing on ensuring that Syrian children's basic needs are met. You can donate directly to their Syria Appeal via their website. Furthermore, the International Rescue Committee (IRC) also seeks to directly assist children and families who have fled Aleppo by providing them with basic necessities and healthcare. You can donate to the IRC's Syria campaign here. Furthermore, if you wish to donate to additional organizations that are focused on broader relief efforts that help children and families, this list of Syrian aid organizations from The Huffington Post U.K. is particularly useful.

Educating others about the plight of Aleppo's children and advocating on their behalf is also an option. On social media, you can use the hashtag "Stand With Aleppo" to share news on the status of children and families in Syria as well as share links to organizations where people can donate funds to provide assistance. On the governmental side, Americans can call their congressional representatives to ask that the United States, along with Europe and other allies, helps ensure the safe evacuation of civilians from Aleppo and guarantees their access to aid. British citizens can sign a petition requesting that the government of the United Kingdom spearhead an aid air drop initiative in Aleppo to ensure that people awaiting evacuation can receive food, medicine, and other essentials.

Finally, pushing for increased public and private sponsorship of refugees constitutes another way in which you can help Aleppo's children once they are evacuated. Families and children fleeing Aleppo are often leaving the only place they have ever known as home, and thus need a safe place to relocate. While it may be increasingly difficult in the new administration due to Trump's stance on refugees, you should continue to contact your Congress member to ask that the United States accepts more Syrian refugees. Particularly, you should request that Congress passes the Save the Children Act of 2016, which would allow 25,000 Syrian refugee children to temporarily relocate to the United States until hostilities in Syria have ceased. Additionally, you can advocate for the launch of a privately-sponsored U.S. Syrian refugee program in 2017.

Overall, donating, advocating, and sponsoring refugees constitute just a few of the ways in which you can help the children of Aleppo. These children and their families are in urgent need of assistance, so any way in which you are able to immediately help would certainly make a difference.