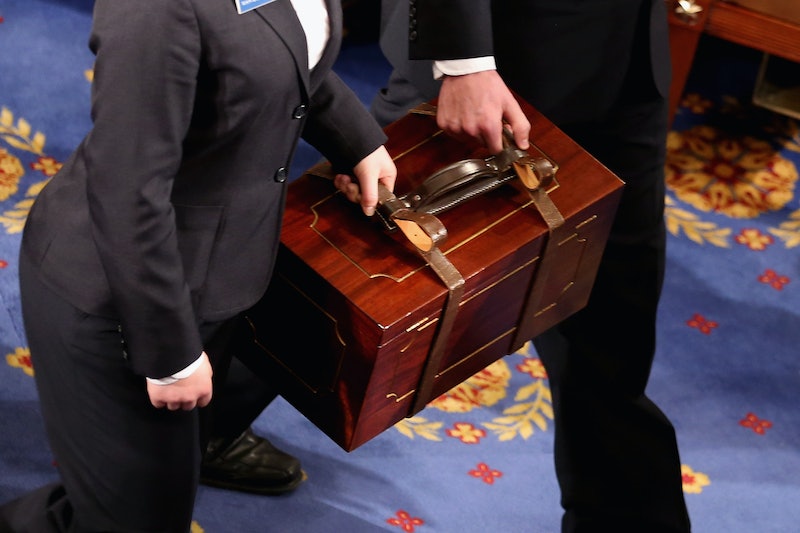 Ever since Donald Trump claimed victory on Election Day, there have been a variety of efforts aimed at convincing the Electoral College to reject the businessman. Anti-Trump voters have circulated petitions (one on Change.org has nearly 5 million signatures); staged protests; and written letters,and made phone calls to electors bound to the Republican candidate. There has also been an effort from within the Electoral College — a group of electors seeking to convince their peers to go against their mandated choices. But who are these faithless electors and how many of them should we expect to take a stand today? Unfortunately for those hoping to block Trump's presidency, there are only 10 known people who've pledged to go against their states' decisions, and only one of them is a Republican.

In November, Democratic electors — Micheal Baca of Colorado and Bret Chiafalo of Washington state — started a movement to push others in their position to vote "with their consciences." They dubbed themselves "Hamilton Electors" in reference to Alexander Hamilton's articulation of the Electoral College's purpose. "We honor Alexander Hamilton's vision that the Electoral College should, when necessary, act as a Constitutional failsafe against those lacking the qualifications from becoming President," reads the group's official website.

While some of the Hamilton Electors don't wish to abolish the Electoral College, there are some who wouldn't mind seeing it go. Polly Baca, another elector from Colorado, told POLITICO, "I have always believed we should have a national popular vote. That's been my position now for decades."

Robert Satiacum, a Washington state elector who'd supported Bernie Sanders, had already announced he wouldn't be voting for Clinton before Nov. 8. He cited Clinton's insufficient support for the Native American population as his reason for not casting his vote in her favor. "She doesn't care about my land or my air or my fire or my water," he said and additionally declared her to be a "criminal."

The 19-year-old elector from Washington, Levi Guerra, vowed to be faithless on Nov. 30. "I promised those who elected me that I would do everything I could to keep Donald Trump out of office," she told The Guardian. The other four Democratic Hamilton Electors are Bob Nemanich and Jerad Sutton of Colorado, Vinz Koller of California, and David Bright of Maine.

And, of course, the lone Republican elector to have publicly announced plans to vote against Donald Trump is Christopher Suprun of Texas. He published a harsh critique of Trump in the The New York Times on Dec. 5 and has shown no signs of reversing his position.

A survey conducted by POLITICO suggests these electors' efforts won't stop Trump's quest to the White House, but it'll be interesting to see if they'll succeed in bringing change to the Electoral College as a system.