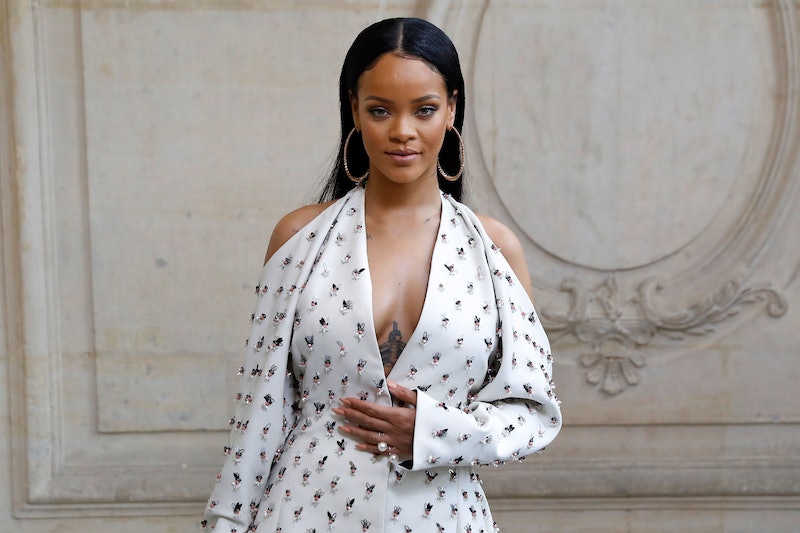 With the new year coming up right around the corner, some of us might be itching for a change — something that RiRi clearly felt herself. While earlier this month she was rocking long dark dreads, Rihanna colored her hair platinum and chopped it into a lob to create a radically new look.

She debuted the look on her best friend's Instagram, appearing with Leandra Goodrich on a video where the two of them tried to nail the "Juju on Dat Beat" challenge. As the two got into formation in the dining room and started dancing, we were treated to a white-jumpsuit-wearing Rihanna, stumbling and laughing through the steps as her choppy blonde locks bounced around underneath a tan beanie. Never one to follow trends but to set them, instead of going for a blunt bob she instead got face-framing side layers that curled a bit at the ends.

As the two friends broke down laughing halfway through the challenge, the cute BFF rough-housing was only second to her awesome new locks. While just two weeks prior she was sporting a long black ponytail on her Instagram, it's so surprising to see her in such a drastic new look. Not only is it a white blonde platinum, but the lob just touches her shoulders, which is a far cry from her waist skimming ponytail from before.

As the winter months are coming up and everyone is marshmallow-ing down in thick coats and all-black looks, it's going to be fun to see how Rihanna will rock her hair during cold-weather style. That brilliant shade will definitely pop against dark hues, and will add a bold addition to her usual out-of-the-box outfits.

Whatever she ends up doing, one can be sure it'll be fearless and 100 percent true to her style. And so far, people are loving the new look:

Here's to hoping she keeps this look for awhile, but you know we won't be mad if she changes it to something else amazing.

More like this
7 Hair Color Trends Of 2023 That'll Inspire Your Next Dye Job
By Jordan Murray
How To Get Wednesday's "Soft Goth" Lip, Straight From The Makeup Designer
By Audrey Noble
Jenna Ortega's Hair Routine Occasionally Involves Washing Out Fake Blood
By Olivia Rose Ferreiro
Hailey Bieber's Best Hair Moments Of 2022
By Audrey Noble
Get Even More From Bustle — Sign Up For The Newsletter