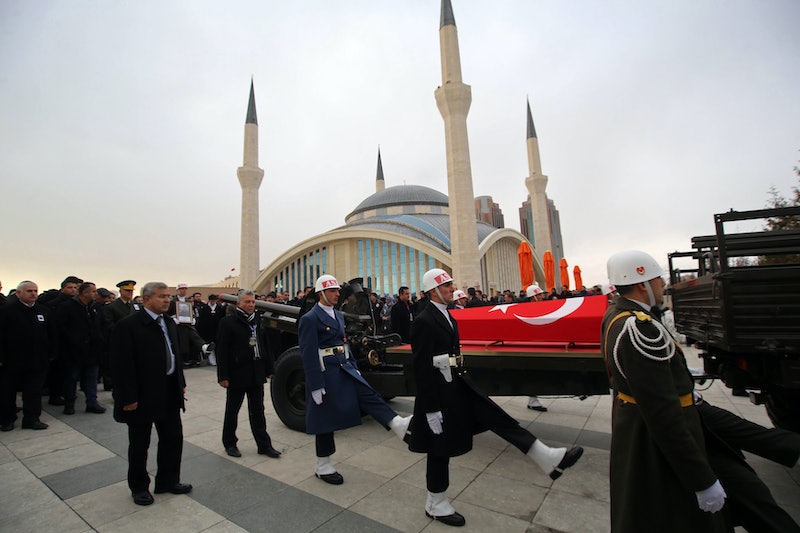 On Monday morning, Andrey Karlov, the Russian ambassador to Turkey, was reportedly shot in Ankara, Turkey. Karlov was speaking at an art gallery for the opening of a photography exhibition titled "Russia Through Turks' Eyes" when he was shot. He was then transported to a hospital following on-site treatment, and was said to be "seriously wounded," along with other people in attendance. Update: Andrey Karlov was later confirmed dead. Turkish news agency Anadolu has identified the gunman as Mevlüt Mert Altıntaş, a 22-year-old "riot police officer." Altıntaş was later killed by Turkish police in a shootout, according to Associated Press sources.

The shooter has not yet been identified by name, but BBC News published photos and video of a suit-clad man wielding a gun who they allege is the shooter. The man reportedly was heard yelling "Don't forget about Aleppo, don't forget about Syria!" and "Allahu Akbar!" which translates to "God is great" in Arabic. Karlov's assailant is reportedly dead, according to Turkish news sources.

In the statement confirming Karlov's death, the Russian Foreign Ministry also said they view Karlov's shooting as a terror attack. The shooting came at a time of strengthening, but also strain, between Turkey and Russia regarding the countries' relationships with Syria and the United States.

Karlov became the Russian ambassador to Turkey in 2013 and has served in various diplomatic positions in the Russian government for 40 years. From 1992 to 1997, he was Russia's ambassador in South Korea. He left behind a wife and a son.

The shooting took place a day before scheduled talks in Moscow between Turkey, Russia, and Iran about Syria and the ongoing crisis in Aleppo. The meeting between the three key regional players was reportedly planned to foster discussion about how they wish to proceed in Syria given differences in opinion about the country's leadership. Iran and Russia back Syrian President Bashar al-Assad, while Turkey (a NATO member) is opposed to his reign and wants him to step down, and is reportedly most concerned about Kurdish militias along the Syria-Turkey border. It's currently unclear whether Karlov would have been in attendance at the Moscow meeting or if the shooting was at all related to it, but the meeting will reportedly still take place despite the fatal attack in Ankara.

The attack also came just days protests along the Turkish-Syrian border by activists reportedly against Russia's role in Syria.

Amid tense diplomatic relations between Turkey and Russia, this attack could further strain the relationship between two of the most important players in the Aleppo crisis. For now, the world of diplomacy must remember that a man has been killed and others are wounded, and that loss of life should take precedence over political matters.